This is precisely why everyone hates Washington 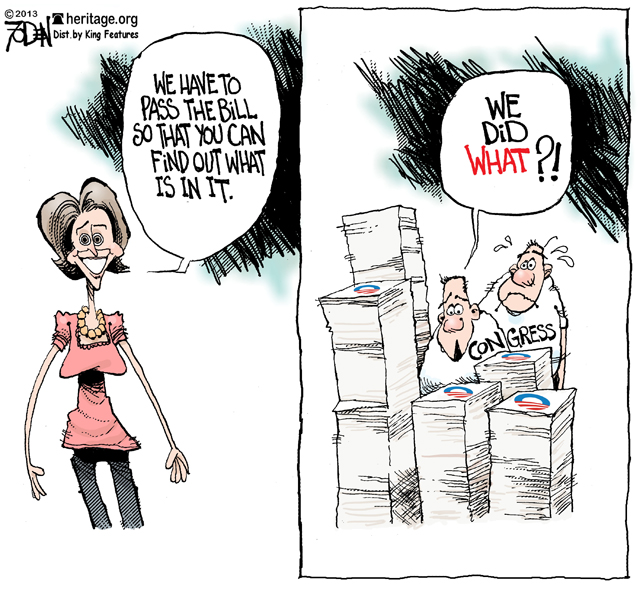 At virtually the same time the House of Representatives was voting to defund the Internal Revenue Service’s piece of Obamacare, the U.S. Office of Personal Management – an executive branch agency – was setting forth a new policy that at the 11th hour changed the rules under which the same law would be applied to lawmakers and congressional staff.

Thanks to the efforts of Iowa Republican Sen. Chuck Grassley during the legislative debate, the Patient Protection and Affordable Care Act included a provision that ensured Congress would be covered by the same rules and requirements for Obamacare as everyone else.

The Democrats in Congress never liked Grassley’s provision but couldn’t vote against it because of the political implications. So it became part of the new law. However, they complained to the president about it shortly before the August recess, telling him that their top staff and key aides were threatening to leave because their health insurance under Obamacare was going to become too expensive – they needed to find new jobs. So, because he’s a really great guy who has enormous empathy for Capitol Hill staffers, the president got the OPM to issue notice that Congress could continue to use federal dollars to subsidize congressional health insurance, for both staff and lawmakers, meaning they would be shielded from the financial impact of Obamacare which has everyone else’s premiums sky-rocketing.

Do you understand now why everyone hates Washington?

Less than a year into his second term, Barack Obama is trying to save his signature legislative accomplishment by turning his White House into a favor factory. The political class, and there are a few Republicans who answer to this description as well, think they are somehow different from you and me; that there can be a separate set of rules for them. It’s getting so it resembles the old Soviet Union, where the party apparatchiks in Moscow made things available to themselves – like special lanes for their cars and limousines so they didn’t have to sit in traffic like the workers did.

Obama is giving the nation of not just “crony capitalism” but crony government, and on steroids. Even Warren Harding and his Ohio gang would stand in awe of his accomplishments. He’s using the federal treasury like a political piggy bank, dispensing rewards to donors, sympathetic interest groups, and the politically well connected. What started with the dispensing of health care waivers to unions and businesses in former Speaker Nancy Pelosi’s congressional district shortly after the new law was passed has exploded into a virtual free-for-all, with everyone standing around with their hands out. Everyone, that is, except the middle class taxpayers who have to foot the bill for Obama’s largess.

“There’s no other way to put it,” wrote Independent Women’s Voice’s Hadley Heath in a message to supporters Monday. “This is special privilege for people whose salaries are already paid by your hard-earned tax dollars. No one else purchasing health insurance though the Obamacare exchanges will be able to get such a sweet deal, having their employer pay a large chunk of their health insurance premiums.”

She added: “Democrats in Congress are writing laws that they want to apply to you, but not to them and their staffers.”

At former Speaker Newt Gingrich’s insistence, one of the cornerstones of 1994’s Contract with America was that all laws applying to the American people and to American business must apply to Congress as well. Obama is moving as far away from that idea as he can.

Congress may not be able to block what OPM is doing but House Speaker John Boehner and the Republicans in the Senate minority would be smart to push to undo it as soon as they come back from the August recess.