Freedom Centers Economic Freedom The Student Debt You Willingly Took On Is Not My P ... 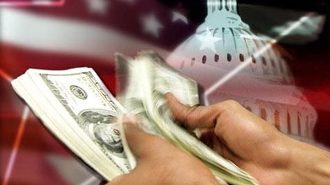 Of all the pandering showcased during Democrats’ attempts to win back the presidency, wiping out student debt ranked at or near the top.

“I believe that education is the future for this country,” socialist Sen. Bernie Sanders barked during the first round of Democratic primary debates, explaining that’s why we must “eliminate student debt and we do that by placing a tax on Wall Street.” Sen. Amy Klobuchar spoke similarly. “I can tell you this,” the Minnesota senator demagogued, “if billionaires can pay off their yachts, students should be able to pay off their student loans.”

There can be no serious discussion of this issue, however, in 60-second sound bites. So, beyond the soak-the-rich shtick that shades every Democratic economic debate point, the candidates resorted to two tactics: shock and sob stories.

The size of student debt provides the jolt necessary to peddle their plans to the American populace. “I got $100,000 in student loan debt myself,” California Rep. Eric Swalwell bemoaned. “College affordability is personal for us,” South Bend, Indiana, Mayor Pete Buttigieg shared, noting that his household has “six-figure student debt.” So, sure, “I believe in reducing student debt,” Buttigieg announced.

Next came the sob stories. Those student loans are suffocating a generation, the candidates suggested. After all, “40 million of us who can’t start a family,” the diaper-changing daddy Swalwell contradictorily proclaimed, adding that they “Can’t take a good idea and start a business and can’t buy our first home.”

“We can’t put people in a position where they aren’t able to go on and move on,” frontrunner Joe Biden agreed.

Tellingly, when not constrained by the debate format, these same politicians push the same narrative to garner support for bailing out student loans, all while the media provides the Democrats a free assist.

“With loans totaling more than $130,000,” Buttigieg’s household is “among the 43 million people in the United States who owe federal student loan debt,” the Associated Press reported last month, before highlighting the myriad plans to bail out student debt pushed by a cadre of presidential candidates. The AP then furthered the narrative by using statistics to shock the public into socialism:

The debtors are so numerous and the total debt so high—more than $1.447 trillion, according to federal statistics—that several of the Democratic candidates have made major policy proposals to address the crisis. Their ideas include wiping away debt, lowering interest rates, expanding programs that tie repayment terms to income and making college free or debt-free.  Student loan debt is often discussed as an issue that mostly affects millennials, but it cuts across age groups. Federal statistics show that about 7.8 million people age 50 and older owe a combined $291.9 billion in student loans. People age 35 to 49, a group that covers older millennials such as Buttigieg as well as Generation X, owe $548.4 billion. That group includes more than 14 million people.

Then the sad tales continue the sales pitch for a government solution to student debt—a ploy that began well before the 2016 elections. Here’s one of myriad media examples.

“Shayna Pilnick, 28, would like to buy an apartment but can’t afford a mortgage. Jacqueline Mannino, 23, and her boyfriend, Benjamin Prowse, 26, want to get married. Jacob Childerson, 24, and his wife, Jennifer, 25, wish they could start a family, but they live with Jennifer’s parents,” is how USA Today opened its 2013 profile of millennials unable to obtain their dream life because they are “tethered” to “tens of thousands of dollars in student loan debt.”

There are many ways to counter these arguments, based on both economics and equity. But it’s hard to counter soundbites with sense, so instead, here are my inquiries for these politicians, the press, and all the students demanding relief from the burdens of their debt: Tell me your sob stories from age 12 on, not what you can’t do now, but what you couldn’t do then. Tell what you had to do then and through college to avoid what is now, to you, crushing student debt.

What time did you get up to deliver papers in junior high? How many hours a week did you work since 14 to save for college? How many toilets did you scrub? How many high school football games did you miss because you were working? What dream college did you forgo to avoid taking out student loans?

Which 8 a.m. class did you take so you could complete your major’s requirements and still work in the afternoon? Which bus line did you take to get to your job because you didn’t borrow to buy a car? What job did you work full-time while completing your MBA at night?

What did you do to afford college? What didn’t you do because of the cost of college? Were you getting tattoos and traveling your way through college? Were you pledging and partying? Did you go to your top-choice university? Maybe an out-of-state public university with higher tuition rates? Which spring break and study abroad destinations did you visit along the way?

Did you splurge on your fairytale wedding instead of paying down your student loans? What cars did you buy or lease? Where did you live? What electronics did you own? What clothing and other personal expenditures did you have? In short, show me the money and how you spent it!

None of my business? You’re right. Nor is your student debt my business or my problem.