Freedom Centers Constitutional and Political Freedom The Tricks Obama Is Trying to Play with the Iran A ...

The Tricks Obama Is Trying to Play with the Iran Announcement 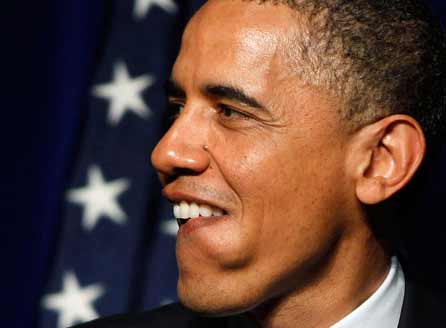 If you look at what happened today between the U.S. and Iran through the lens of domestic American politics, Barack Obama has made a very clever play here—because what might be called “the agreement of the framework of the possibility of a potential deal” gives him new leverage in his ongoing battle with the Senate to limit its ability to play a role in the most critical foreign-policy matter of the decade.

The “framework” codifies the Obama administration’s cave-ins but casts them as thrilling reductions in Iran’s capacities rather than what they are—a pie-in-the-sky effort to use inspections as the means by which the West can “manage” the speed with which Iran becomes a nuclear power.

Obama’s tone of triumph this afternoon was mixed with sharp reminders that the deal is actually not yet done—and that is entirely the point of this exercise from a domestic standpoint. the triumph signals his troops and apologists that the time has come for them to stand with him, praise the deal sheet and pretend it’s a deal, declare it historic, and generally act as though the world has been delivered from a dreadful confrontation by Obama and Kerry.

But since the deal is not yet done, it could still be derailed. And that is where Obama’s truly Machiavellian play here comes in: He may have found a way to put the Senate in a box and keep Democrats from melting away from him on Iran and voting not only for legislation he doesn’t want but also to override the veto he has promised.

The Senate has two provisions at the ready with which it could go ahead any time. One, called Kirk-Menendez, imposes new sanctions on Iran. Obama promised a veto of this bill should it pass, and after today, one ought to presume that it’s dead.

The other, Corker-Menendez, requires the administration to submit any deal to the Senate within 60 days of its signing. This is a key provision because, of course, what the Iranians want—and what they said today they got—was the lifting of all sanctions. The president, in his statement, vowed to lift the “nuclear” sanctions (there are others involving human rights) if the Iranians comply by the terms of the deal.

Existing sanctions legislation features waivers the president can arguably use to do that. But those sanctions were put into place specifically to make it incredibly painful for Iran to retain any nuclear-weapons capability—not as a means of acceding to Iran’s retention of a nuclear capability.

For this reason, and for the reason that the president is essentially negotiating an arms-control treaty with Iran, the Senate should approve any final deal. Obama disagrees and claims this is merely a nuclear-agreement, not a treaty, and therefore Congress has no role.

That’s a very nervy argument. It is not only disrespectful of the Senate but it misrepresents the nature of what’s being negotiated. And that’s why it’s an argument it appeared the president would lose—that senators would not only vote for Corker-Menendez but would override his veto of it.

Which is why the deal-that’s-not-yet-a-deal works in his favor. Talks are now to continue until the end of June. Obama can and will argue to Democrats that they owe it to him, to their base, and to their governing ideology to give him all the room he needs to get to June 30.

Of course, if the legislation does not pass by June 30 and Obama signs a final deal, the game is up; the Senate can’t retroactively insist in July he bring it to them for a vote.

Will there be a deal by June 30? Maybe, maybe not; maybe they’ll finish, maybe they won’t; maybe the Iranians will say they didn’t agree to this or that and blow up the whole thing; who knows. Probably the total collapse, after all this, would bring the Kirk-Menendez sanctions back to life. Which is why there will never be a total collapse—because these talks can simply go on….