Freedom Centers Constitutional and Political Freedom The US job market is dead in the water and not get ...

1. This was the jobs report that was supposed to reflect an economy kicking into higher gear. Goldman Sachs, for instance, was looking for 200,000 net new jobs. And whisper estimates were even higher. Instead, the economy added just 169,000 jobs vs. the 180,000 consensus forecast.

3. Even at 169,000 jobs a month, it would take an unbelievable 9 years and 10 months to return to pre-Great Recession employment levels, according to Brookings. See you in 2023 — assuming no recessions between now and then.

4. Sure, the unemployment rate fell to 7.3%. But that’s only because the labor force participation rate fell to a 35-year low. If it were still at January 2009 levels, the unemployment rate would be 10.8%. As RDQ Economics cautions, “This continued fall in participation should give pause to those who argue that the decline is cyclical and will be reversed.” In other words, the US faces a permanently larger pool of jobless Americans.

5. The employment rate — the share of the non-incarcerated, non-military working-age population with any job — also fell and remains dead, dead in the water. (See above chart).

One reason for that, notes the Economic Policy Institute is “our 3.8 million “missing workers … workers who have dropped out of, or never entered, the labor force due to weak job opportunities in the Great Recession and its aftermath.” If they were in the labor force looking for work, the unemployment rate would be 9.5% instead of 7.3%.

6. Recall that according to the Obama White House’s 2009 stimulus forecast, August 2013 should have been the 2nd straight month at 5% unemployment: 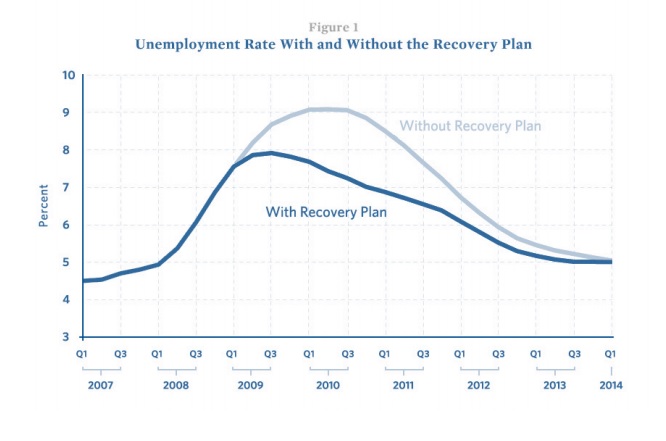 7. The median unemployment duration actually increased to 16.4 weeks from 15.7 weeks in July, while the share of the unemployed without work for 27 weeks and longer jumped to 37.9% from 37.0%. There are 3 million more long-term unemployed today — four years after the end of the recession — than before the recession.

8. Worst of all, this jobs report could be a signal that the US economy is not about to accelerate as many are forecasting. IHS Global Insight:

This report confirms our outlook of lackluster economic growth for the second half of the year. The headline establishment survey number, 169,000 jobs, more or less continues a trend over the past several months, as does the downward tick in the unemployment rate. … There are other negative aspects of this report from the household survey. While this survey is considered to be a less precise measure of employment on a month-to-month basis, total employment fell by 115,000 in contrast to establishment survey gains.

Moreover, the size of the labor force shrank by 312,000 in August, following a smaller decline in July. Virtually all of this decline can be traced to men; the number of women in the labor force increased in August. This suggests that much of the decline came from occupations that are male-dominated, such as construction, and that many former workers are becoming discouraged about their job prospects and dropping out of the labor force as a result.

9. Looking at a rolling, 3-month average of job numbers from the more volatile household survey, economist Robert Brusca asks, “Where did the full time jobs go over the last SEVEN MONTHS?”

Bottom line: Yes, the economy is growing, but not at a rate generating very many jobs, either full-time or part-time. The jobs recovery seems to have stalled. It’s not getting better.

James Pethokoukis is the Money & Politics columnist-blogger for the American Enterprise Institute. He has written for many publications including USNews & World Report, The New York Times, The Weekly Standard, Commentary, USA Today, and Investor’s Business Daily.