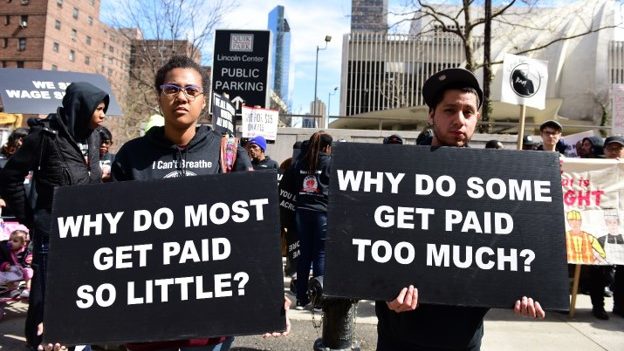 On most of the issues highlighting the 2020 campaign, the Republicans have a great story, especially the economy, law enforcement, foreign policy (including trade), national security, energy, and job creation. The Democrats have concentrated on three critical issues, however, which are nearly ignored by most Republicans: the wealth gap, health care, and climate change

These issues are currently owned by the Democrat candidates; they have not even been addressed directly by the Republicans. This silence is a tragic mistake because current polls show that these three issues are of critical importance to significant numbers of the American electorate. If Republican candidates continue to ignore these two issues, they will suffer in the only polls that really count – the votes in November.

Today’s topic is the wealth gap, with discussions of health care and climate change to follow in succeeding columns. I use the term, “wealth gap” in preference to “wage gap” and “income inequality” because “wealth” includes assets which are relatively long range as opposed to “wages” or “income” which may fluctuate from time to time.

The Republican response to the wealth gap is the “trickle-down” economic theory: prosperity for the wealthy means incremental income to the entire workforce because the wealthy will of necessity invest in an expanding economy thus benefiting the workers who actually produce new goods and services by which the economy is actually expanded. This is the argument prominently featured by President Trump in his famous rallies.

And, measured by present and past metrics, it is true. A flourishing economy does indeed raise wages and job opportunities. When applied to a stagnant employment environment, the chief beneficiaries on a percentage basis are the lower wage workers – i.e. when a person goes from unemployed to employed, the percentage of improvement is 100%. This is, of course, a valuable trend.

The next step, however, poses an altogether different problem: in a tight labor market – which America is rapidly approaching – how does an employer retain an experienced worker? And an ancillary problem: how does the country avoid a steady inflation, as wages rise, and senior employees can seek and find ever higher wages?

There are free market solutions to both these questions. My answer may be considered by traditional economics a radical solution, namely profit-sharing. There are various ways to implement the concept of profit-sharing – e.g. stock grants or options, profit-based bonuses, or employee stock option plans (ESOP), among others.

The basic hedge against inflation is the fact that increases in income to the workers comes from profits rather than expenses, so prices do not have to increase. The operational result is that workers who have a stake in the performance of the company tend to work harder and more efficiently, and greater income leads to higher job satisfaction and loyalty.

There are other reasons to advocate profit-sharing, namely, redressing the imbalance in asset ownership in America, which currently shows that at least 80% of America’s wealth is controlled by 1% of the population. This is a frightening situation for a democracy which is founded on a prosperous middle class. Oligarchs are waiting to rule the nation (e.g. already three billionaires are running for president).

There is also a moral reason for profit-sharing which can be summarized as follows:

1) The increase in national wealth over the past 200 years is due primarily to increases in productivity, which in turn is due to new technologies.

2) The implementation of technological innovations involves a number of stakeholders – inventors, investors, managers, implementers and buyers.

3) The benefits of the new technologies are currently heavily weighted toward all the stakeholders expect the implementers – the workers who bring into actual being the ideas of the inventor – i.e. they design and build the machinery which produces the product, fabricate it, market and sell it, repair it and teach users. Without the implementors, there would be no technology – only ideas on paper.

4) All of the stakeholders should be rewarded when the product is sold; it is only fair, therefore, that each be rewarded in proportion to the value of their contribution to the success (or failure) of the product. This is called “profit-sharing”.

This idea is not as novel nor as radical as it may seem to traditionalists. In the first place, the entire history of free-market capitalism shows it ever evolving towards more and more recognition of the value of labor in the forward march of progress.

It is also true that the chief proponents of this march have historically been the organized labor movement – at least until the 1970’s. Since then American unions have shifted from ever advancing workers’ rights in the marketplace to attempting to achieve progress through government intervention, which has meant in practice an alliance with the Democrat Party and a slippery slope toward socialism.

The results have not been encouraging. We have seen the denuding of America’s manufacturing base, the disheartening imbalance of income between management and labor, and the gradual slipping of much of America’s middle class into poverty and desperation. The bureaucracy of American Labor has failed miserably in protecting and advancing the cause of America’s workers.

The most impressive advocacy for profit-sharing in today’s marketplace is called “Conscious Capitalism”. This is a rapidly growing group of companies who represent a new generation of free market businesses. It is both a movement and an organization.

As an organization, Conscious Capitalism, Inc. now numbers thousands of companies, millions of employees, with chapters in 41 countries, and a number of large firms including Federal Express, Southwest Airlines and Costco among others. (For more information, see www.ConsciousCapitalism.org).

As a movement, it counts Amazon as one of its colleagues along with many other companies, both large and small. While this group is not particularly fond of organized labor, I believe there is a place for Labor in this movement, unions which work with and not against management and represent workers who are both employees and recipients of prorated profits from their work.

The time for advancing workers’ rights is now – in the 2020 election campaign. To win back the workers of America, the GOP must move “Onward and Upward!”