Tom Brady doesn’t owe you an explanation on Trump 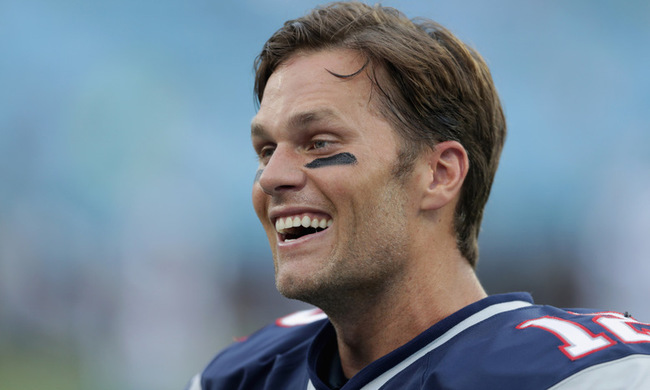 If you thought Super Bowl week would provide a much-needed respite from our polarized national political climate, think again.

New England Patriots head coach Bill Belichick and quarterback Tom Brady have been getting the third degree on whether they support President Trump.

Not only have the two leading NFL figures been peppered with questions about Trump at their media availabilities, but editorialists and opinion writers have been demanding to know: Are you now or have you ever been a passenger of the Trump train?

Brady in particular has found questions about Trump as persistent and difficult to dodge as the New York Giants pass rush circa 2007.

“Tom Brady no longer gets a pass on his friendship with Donald Trump,” insisted USA Today sports writer Nancy Armour. “Not after this weekend, when the country boiled over in rage and indignation at Trump’s decision to turn America’s back on refugees.”

“Tom Brady’s politics are more un-American than Colin Kaepernick’s have ever been,” blared a post by a Morehouse College professor who argued, “Brady’s obliviousness reeks of white privilege and dismissiveness, a #MAGA trait if there ever was one.”

Patriots team owner Robert Kraft has also come under fire for his relationship with Trump. Newsweek says Pats fans “throw a flag” on their team’s Trump support. SB Nation claims “the reddest team” in “one of the bluest states” has a “Trump problem.”

This is all poppycock. The NFL is filled with owners and coaches who support Republican candidates, including New York Jets owner Woody Johnson who is being rewarded for his Trump support with an ambassadorship to Great Britain. Kraft, Belichick and Brady aren’t among them.

Between 2008 and 2014, 63.8 percent of Kraft’s political giving went to Democrats. Although his contributions were relatively modest, he was the biggest donor to President Obama in 2012 among NFL owners, giving $57,900 to the Obama Victory Fund.

Similarly, Belichick is reportedly a Democrat. The closest Brady has ever come to publicly expressing a political opinion is hanging a red “Make America Great Again” baseball cap outside his locker over a year before the presidential election. Belichick wrote Trump a letter that became public.

Not even the Wells Report would consider this evidence against them.

The plain fact is that Trump was a businessman and media celebrity for decades before he became particularly outspoken about politics, much less became a candidate for office. Kraft, Belichick and Brady all formed their relationships with Trump during that time.

For all his faults, Trump was a friend to Kraft after his wife died. The president supported Brady in public during the Deflategate saga, when few outside New England did. Trump, like 2004 Democratic presidential nominee and former Secretary of State John Kerry, has attended Patriots games for years.

Let’s suppose, as seems plausible, that Brady and Gisele Bundchen were like many American couples: the mostly apolitical husband voted for Trump and his incredulous wife told him to shut up about it.

Those who believe the 63 million Americans who voted for Trump owe them an explanation say they don’t want to “normalize” the president. Not only does Trump’s office make this impossible, but this very presumption — and the politicization of every facet of life — is itself corrosive of American norms.

A Brooklyn man has launched a petition to ask Disney World to exclude an animatronic Donald Trump from its Hall of Presidents.

“We ask that Walt Disney World take a stand against divisive and hurtful rhetoric and have the backs of millions of Americans and people worldwide whose day would be ruined by the depiction of a speech by Donald Trump,” the petition reads.

Disney World is located in a state where a plurality of voters cast their ballots for Trump.

Politics is obviously important. So is standing up to presidents and other government officials you believe are behaving imprudently or unjustly.

But it isn’t all there is to life. “How small, of all that hearts endure,” wrote Samuel Johnson, “That part which laws or kings can cause or cure.” These inquisitions into the politics of even very famous private citizens is not, to use an overworked phrase, who we are.