Freedom Centers Defending Freedom Tribune-Review: No more lies about the Benghazi at ...

Tribune-Review: No more lies about the Benghazi attack 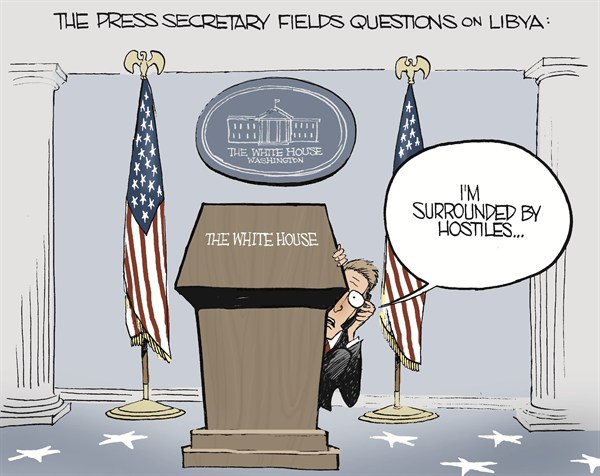 Regarding the circumstances surrounding the terrorist attack on a U.S. consulate in Libya last month that left this nation’s ambassador and three others dead, the Obama administration is:

c.) living in a parallel universe, or

d.) all of the above

Go to the head of the class if you chose “all of the above.”

We’re all familiar with the administration’s first narrative of the Sept. 11 incident — it was the spontaneous reaction of a rioting mob upset over a low-budget anti-Muslim film. But that fiction began to unravel almost immediately.

There was no “protest,” only well-armed terrorists in a well-coordinated attack. Yet for weeks the White House stuck to its lie. And even now, after being forced to concede its tall tale was fact-bereft, many of Obama’s acolytes have not stopped lying.

Among the latest, during Thursday night’s vice-presidential debate, Joe Biden insisted that the consulate did not request additional security. That’s a lie, as the congressional testimony of four State Department officials proves.

Then there’s Obama campaign mouthpiece Stephanie Cutter, insisting that the unbelievable Benghazi attack narrative is an issue only because the Republican presidential ticket has made it one. How stupid is she and how stupid does she think the American people are?

Caught up in its repeated lies, the Obama administration has created a parallel universe. Where and when does it end?

In the polling booth on Nov. 6.

This Editorial was published in the Pittsburg (PA), Tribune-Review on October 14, 2012.