Two Hundred Yards Is Too Close 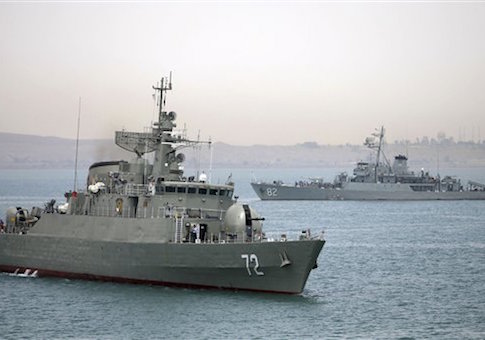 by Jed Babbin • The American Spectator

Iranian Revolutionary Guard Corps boats harassed U.S. Navy ships and boats again last week in what has become a commonplace in the Persian Gulf. All of these incidents have happened in international waters. The Iranians claim much of those waters as their own.

In January, the Iranians fired missiles within about fifteen hundred yards of the nuclear carrier USS Harry S. Truman. In that same month, the crews of two U.S. Navy patrol boats were captured and detained by the Iranians, the U.S. crews having failed to fire a shot in their own defense. They were released after the Iranians had made propaganda videos shaming our sailors.

In the latter incident, the commander of the surrendered boats later said he surrendered because he didn’t want to endanger Obama’s efforts to lock in his nuclear weapons deal with Iran.

The number of these incidents has increased fifty percent this year, according to the Defense Department. It’s easy to see why: The Iranians see us as weak and vulnerable. We are doing nothing to discourage that view.

Many of the people who will vote in the presidential election this year don’t remember when things were different. When America actually stood up to defend itself and proved to its enemies that they couldn’t threaten or harm us without punishment.

It doesn’t seem that long ago, but it is. Way back in 1988 we had a different kind of president.

On April 14, 1988 an American frigate was severely damaged by a mine in the international waters of the Persian Gulf. Surrounding mines, recovered by the Navy, had serial numbers that had been seen on an Iranian minelaying ship.

In response to that attack, naval ships fired on and destroyed at least two Iranian oil platforms that were being used to coordinate attacks on our ships. Marines landed on the platforms to confiscate weapons and communication equipment.

Those were the proper reactions to Iranian aggression. The Iranians didn’t dare challenge us for years, knowing that the Fifth Fleet, based in nearby Bahrain, was strong enough to destroy Iran’s entire navy and as much of the country as it was ordered to. It still is.

Nothing like that will be done now because Iran knows that no matter how much it harasses our ships — and those of our allies — President Obama values his nuclear weapons deal too much to respond to these well-planned acts of aggression. No response such as the one the Gipper ordered will happen while Obama is president or while either of his possible successors governs us.

The Persian Gulf’s entire eastern border is on Iran’s shore. The Strait of Hormuz, where it usually attacks, is only 21 miles wide at its narrowest point.

Iran knows it is in the drivers’ seat in the Persian Gulf, but it doesn’t want to attack major U.S. Navy ships because it still fears the response such an attack could mean. It continues to threaten to close the Strait of Hormuz, the choke point through which much of the world’s oil supply flows, and will continue the harassment of our ships with increasingly dangerous ploys such as the ones we saw last week.

Start with the fact that the muzzle velocity of a .50 caliber machine gun is about 2,900 feet per second. That means if an Iranian patrol boat fired on one of our boats or ships, it would take two-tenths of a second for the bullet to travel the 200 yards, the range one Iranian boat was allowed to close in on the American patrol boat this week. That’s too little time for anyone on our ships or boats to react.

One of the principal duties of every commander of every U.S. Navy ship and boat is to protect the vessel and its crew. That duty supersedes any concern about Obama’s deal with Iran and any concern for harming any Iranian boat, ship, or aircraft that approaches his vessel.

My Navy pals tell me that there’s no problem with an Iranian boat approaching a destroyer or cruiser at a range of 300 yards. A typical destroyer has a five-inch gun, several mounted .50-caliber machine guns, and a few missiles to defend itself easily at that range. But a coastal patrol boat may have a couple of .50’s on it and little or nothing else.

Our ships and boats work together patrolling the Persian Gulf’s international waters. The larger ships can easily provide cover for the smaller ones and prevent the Iranians from getting too close.

“Too close” has to be publicly defined. The Iranians should be put on notice that if they close to within 500 yards of any ship or boat, they will be fired on, not just given the courtesy of warning shots. Five hundred yards is about the range of a rocket-propelled grenade (though it’s hard to hit anything smaller than a large ship from that distance).

What that means in practical terms is that the Iranian practice of harassing our ships and boats can be brought to at least a temporary end by sinking a few (or more) of the Iranians when they practice their attacks.

The Iranian boats regularly speed along at forty knots or more (about 46 miles per hour). At that speed, one mistimed turn can close the range from 200 yards at about 50 feet per second. Teaching the Iranians that they can close on our boats and ships as close as they have is too dangerous.

The rules of engagement the Navy has established almost certainly say that we shouldn’t fire unless fired upon, but a commander’s discretion still allows him to fire whenever a possible attacker gets too close. That discretion should put a few Iranians on the bottom of the Persian Gulf the next time they get within range, far beyond 200 yards. Over to you, Navy.