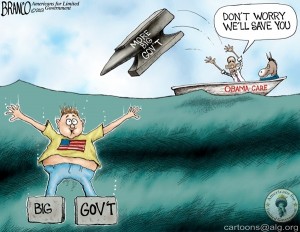 Americans have recently been hit with some of the largest premium increases in years, according to a Morgan Stanley survey of insurance brokers.

The investment bank’s April survey of 148 brokers found that this quarter, the average premium increase for customers renewing an insurance plan is 12 percent in the small group market and 11 percent in the individual market, according to Forbes’ Scott Gottlieb.

The hikes — the largest in the past three years, according to Morgan Stanley’s quarterly reports — are “largely due to changes under the [Affordable Care Act],” analysts concluded. Rates have been growing increasingly fast throughout all of 2013, after a period of drops in 2012.

While insurers were hiking premiums since 2012 by smaller amounts, the lead-up to the Obamacare’s launch has seen the average rate at which premiums are growing fourfold.

The small group market saw a jump from a growth rate of close to 3 percent during Morgan Stanley’s September 2013 survey to just above 6 percent three months later in December — the month before a surge of Obamacare regulations hit insurance companies.

Over the next three months, the rate doubled again to the current average small growth premium growth rate of 12 percent.

Individual policies saw a much starker jump after the Obamacare exchanges launched, in anticipation of the health care law going live in 2014. Morgan Stanley’s September 2013 survey, like the previous three quarters, found a fairly constant growth rate around 2 percent — but in December, the rate had shot up to above 9 percent.

The survey found that premium increases are due to several specific Obamacare policies. The most talked about may be the new benefits all insurance plans are required to offer and excise taxes targeted at insurers themselves, Forbes reports.

But there are two other big contributors to the rise in costs. Age restrictions on premiums prevent the insurer from charging older customers who cost more to cover a higher premium — hiking the costs for young and healthy people disproportionately. Commercial underwriting restrictions also bump up insurers’ costs and are reflected in premiums.

Sarah Hurtubise is a reporter at The Daily Caller.