Virginia makes criminals of everyone who drives with the flow of traffic on interstate highways, but help is on the way 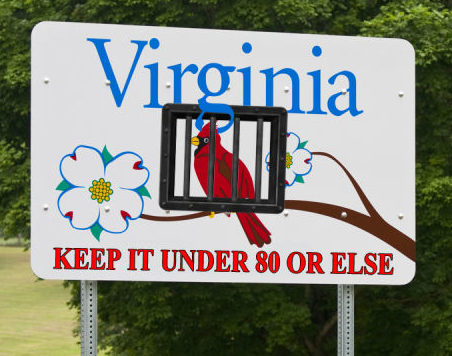 In Virginia, since 2010, driving more than 10 miles per hour (mph) over the top speed limit can get you charged with a criminal reckless driving and land you in jail for up to a year and fined up to $2,500. This is a textbook case of over-criminalization and is an abuse of governmental power. You read that right. Virginia’s top speed limit is 70 mph on interstates. But by law, driving over 80 mph can get you charged with criminal reckless driving — just 10 mph over the posted speed limit. Simply stated, driving with the flow of traffic on an interstate makes you a criminal in Virginia. That’s nuts!

I wrote about this issue several months ago and pointed out that someone driving more than 10 mph over the speed limit may well expect a speeding ticket and appropriate fine. But no one expects to receive a one year jail term and thousands in criminal fines. Shortly after that article, Virginia began to put signs up warning people of Virginia’s bizarre law. That at least solves the problem of ridiculous surprises, but it doesn’t solve the problem that Virginia is making criminals of soccer moms and grandmas for simply driving with the flow of traffic.

Finally, someone in Richmond is working to fix this absurd law. Senator David Suetterlein (R-Roanoke) has sponsored SB1409 to raise the threshold for a reckless driving charge by 5 mph. That is a good start. I’m not sure that even driving 15 mph over the posted speed limit on an open interstate highway should make you a criminal either, but it is a lot better than the current law.

Every state has reckless driving laws — but many states provide that reckless driving is not determined by simply exceeding the speed limit by a set amount, but must require some other aggravating circumstance — like weaving in and out of traffic, tailgating, etc. I think this approach is correct.

But, Sen. Suetterlein is to be congratulated for at least taking a first step to fix a manifest injustice in Virginia’s code. The Transportation Committee supported the bill 11-2. Most Democrats supported this comment sense bill. But notably two did not — Sen. Creigh Deeds (a former gubernatorial candidate) and Sen. Jennifer Wexton. Additionally, Sen. Barbara Favola (D-Arlington) says she may vote no on the bill as she is currently “on the fence.” On the fence about making criminals of soccer moms? Really? Most rational people stand with the Commonwealth’s moms.

The primary argument against the bill is that people may speed more. This is a stunningly weak argument. If drivers speed, give them a ticket with a reasonable fine. But there is no need to treat driving with the flow of traffic on an interstate as a crime. That simply makes a criminal of us all.

Those who voted against the bill in committee or plan to vote no later or are on the proverbial fence should explain why enforcing speed laws with traffic fines — which also increase the cost of insurance so you pay twice when you speed — isn’t enough. They should explain why virtually every driver in the Commonwealth of Virginia — who simply drive with the flow of traffic on an interstate — should be deemed a criminal and threatened with a year in jail and thousands of dollars in criminal fines. Simply telling us that speeding is dangerous, is weak minded and avoids the real issue. If speeding is a problem, enforce the existing law. Write speeding tickets. But don’t make ordinary and common behavior like driving with the flow of traffic a crime.