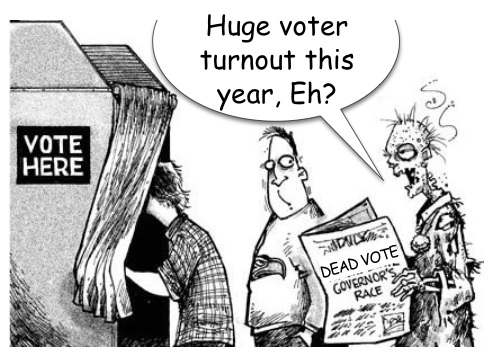 Progressives and the Justice Department are doing all they can to stop improvements in election integrity. 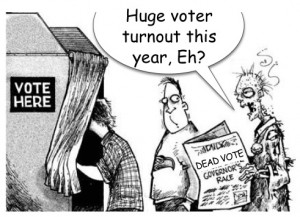 In the past few months, a former police chief in Pennsylvania pleaded guilty to voter fraud in a town-council election. That fraud had flipped the outcome of a primary election. Former Connecticut legislator Christina Ayala has been indicted on 19 charges of voter fraud, including voting in districts where she didn’t reside. (She hasn’t entered a plea.) A Mississippi grand jury indicted seven individuals for voter fraud in the 2013 Hattiesburg mayoral contest, which featured voting by ineligible felons and impersonation fraud. A woman in Polk County, Tenn., was indicted on a charge of vote-buying—a practice that the local district attorney said had too long “been accepted as part of life” there.

Now come the midterm elections on Nov. 4. What is the likelihood that your vote won’t count? That your vote will, in effect, be canceled or stolen as a consequence of mistakes by election officials or fraudulent votes cast by campaign workers or ineligible voters like felons and noncitizens?

Unfortunately, we can’t know. But one thing is almost certain: Voter fraud will occur. Many states run a rickety election process, lacking rules to deter people who are looking to take advantage of the system’s porous security. And too many groups and individuals—including the NAACP, the American Civil Liberties Union and U.S. Attorney General Eric Holder —are doing everything they can to prevent states from improving the integrity of the election process.

Their refrain is that voter fraud either doesn’t exist or is so insignificant that nothing needs to be done to improve ballot security. Yet in the U.S. Supreme Court’s 2008 ruling that upheld Indiana’s voter ID law, Justice John Paul Stevens acknowledged “flagrant examples of such fraud” throughout the nation’s history and observed that “not only is the risk of voter fraud real” but also that “it could affect the outcome of a close election.”

Voting by noncitizens alone could swing such races. A new study by two Old Dominion University professors, based on survey data from the Cooperative Congressional Election Study, found that 6.4% of all noncitizens voted illegally in the 2008 presidential election, and 2.2% voted in the 2010 midterms.

Since 80% of noncitizens vote Democratic, according to the survey, the authors concluded that these illegal votes were “large enough to plausibly account for Democratic victories in a few close elections.” Those that might have been skewed by noncitizen votes included Al Franken ’s 312-vote win in the Minnesota race for the U.S. Senate. As a senator, Mr. Franken would cast the 60th vote needed to make ObamaCare law.

We’ll never know what role noncitizen voting has played in past elections, but the problem is real. While states like New York ignore this problem, other states have passed rules to deal with it.

In addition to voter ID laws, Kansas and Arizona have put in place new proof-of-citizenship requirements for registration to prevent illegal voting. It is a common-sense and needed reform. In recent weeks North Carolina found more than 100 illegal aliens, still in the country thanks to the Obama administration’s Deferred Action for Childhood Arrivals program, registered to vote. Yet opponents including the League of Women Voters and Common Cause are challenging citizenship requirements in the courts.

Some states have also tried to eliminate same-day registration, which is a recipe for fraud since it prevents election officials from verifying the eligibility of voters and the accuracy of voter-registration information. States also are reducing early voting days, a relatively new phenomenon that has its share of election-administration problems.

These moves to shore up election integrity have been resisted by progressives at every turn, claiming without evidence that such efforts suppress minority turnout. While the lawsuits have largely failed to overturn the rules, they have succeeded in delaying their implementation and made it costly for states to improve election security. South Carolina’s voter ID law will be in place in the November election, but it cost the state $3.5 million in 2012 to beat Eric Holder’s Justice Department in court. The U.S. Supreme Court just upheld a decision throwing out an injunction against a Texas voter ID law, which was in place in state elections in 2013 and primary elections this year.

North Carolina, Ohio and Wisconsin are still battling progressives and the Justice Department in court over their election rules, although North Carolina and Ohio also got favorable decisions from the Supreme Court, allowing them to implement their rules for this election cycle. As John Fund and I outline in our new book on Attorney General Holder, the Justice Department refuses to enforce the federal law requiring states to keep accurate voter rolls—even though a 2012 Pew study found that the rolls are riddled with errors and ineligible voters.

How far are some liberals willing to go in undermining ballot integrity? This month, the conservative guerrilla filmmaker James O’Keefe caught a director of the “social change” organization Work for Progress and an employee for the Greenpeace environmental group voicing their approval of absentee-ballot theft and fraudulent voting in Colorado. Recent polls indicate that the state’s governor and U.S. Senate races are statistical ties.

Greenpeace fired the worker who was caught approving voter fraud, but too many on the left shrug at the prospect of tainted elections. At a Cincinnati “voting rights” rally in March, Rev. Al Sharpton and other liberal activists celebrated Melowese Richardson, who was convicted last year of voter fraud by using her position as a poll worker to vote more than once in the 2012 presidential election. Her five-year prison sentence was amended to five years of probation earlier this year—a delayed wrist-slap that further erodes respect for the ballot box.

For too long, America has basically used the honor system in the voter-registration and election process. That approach is increasingly being revealed as indefensible in a vibrant democracy, where we should make it easy to vote and hard to cheat.