What is Lois Lerner hiding? 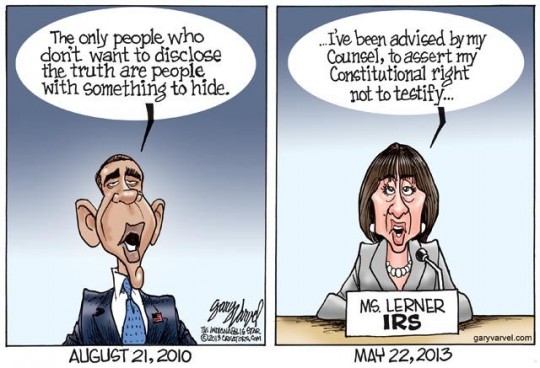 On Wednesday, the former IRS officer again invoked the Fifth before the House Oversight Committee. That precipitated a heated exchange between the committee’s Republican chairman, Darrell Issa, and Democratic ranking member Elijah Cummings, who called the hearings “un-American.” And that spat has become the story.

No doubt that is exactly what Cummings had in mind. Because it distracts attention from the substance of the hearings — and from the questions raised by e-mails and public remarks Lerner wrote, received or made when she was IRS director of tax exempt organizations. The Weekly Standard reminds us of the main ones:

•  Why did Lerner describe the Tea Party matter as “very dangerous”?
•  What made her worry that a “c4 project” (looking at how nonprofits and unions are abiding by IRS rules) could be construed as a “per se political project”?
•  What was meant by an e-mail she received saying discussions about new regulations would be addressed “off-plan”?
•  When she complained in public that “everyone” was “screaming” at the IRS “to fix the problem” created by the Supreme Court ruling in Citizens United — which affirmed the free-speech rights of corporations — who was “everyone”? And by fixing the problem, did she mean effectively subverting the ruling?

In this context, it’s not surprising that Democrats have pooh-poohed the investigation. The record shows Democratic pols, including New York’s Sen. Chuck Schumer, among the screamers insisting the IRS investigate conservative outfits.

The questions raised by Lois Lerner’s own comments and e-mails remain compelling. Before we conclude there was not even a “smidgen” of corruption, as President Obama has asserted, we’d like to hear the answers — given under oath.

This article was written by the editorial board of  The New York Post.