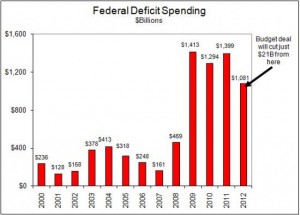 As a senator and presidential candidate, Barack Obama said that he detested budget deficits. In 2006, when the aggregate national debt was almost $8 trillion less than it is today, he blasted George W. Bush’s chronic borrowing and refused to vote for upping the debt ceiling: “Increasing America’s debt weakens us domestically and internationally. Leadership means that ‘the buck stops here.’”

In 2008, Obama further blasted Bush’s continued Keynesian borrowing: “The problem is, is that the way Bush has done it over the last eight years is to take out a credit card from the Bank of China in the name of our children . . . so that we now have over $9 trillion of debt that we are going to have to pay back — $30,000 for every man, woman, and child. That’s irresponsible. It’s unpatriotic.” Strong words. But so worried was Obama about the debt that just two weeks after he took office, he promised still more: “And that’s why today I’m pledging to cut the deficit we inherited by half by the end of my first term in office. I refuse to leave our children with a debt that they cannot repay.”

In his first term, Obama has added more than $5 trillion to the national debt, borrowing more in four years than the “irresponsible” and “unpatriotic” Bush did in eight. In fact, Obama is on schedule to add more total debt by the end of his two terms than all prior presidents combined. What happened to worries about leaving our children with a “debt they cannot repay”? And where did all that borrowed money go, given that the war in Iraq has been over for more than a year, and we are winding down in Afghanistan?

The recession that ended in 2009 cut revenues, and the population continues to get older and draw more on federal entitlements. But all that said, we have spent record trillions of dollars during the last four years increasing the size of government. A vast 2009 stimulus plan; new Obamacare; new federal employees; vast new expansions in food stamps, disability, and unemployment insurance; and spiraling Medicare, Medicaid, and Social Security payments all increased government spending in each year of the Obama presidency to a higher percentage of the gross domestic product than at any time since 1946.

Obama, for all his overblown rhetoric in 2006, was once right about the deficits. But the antidote for the profligacy of the Bush administration was not to increase the borrowing even more.

What, then, explains the vast gulf between the prior Obama rhetoric and his current record on deficits?

One of two things occurred.

The first possibility is that Obama and his advisers really believed that record deficit spending, near-zero interest rates, and expansions in federal entitlements would jump-start the economy into prosperity. In fact, the opposite occurred. Economic growth continued to hover around or below 2 percent of GDP. Unemployment has never dipped below 7.8 percent during Obama’s entire presidency. The massive borrowing made things worse, not better.

A second explanation for Obama’s “irresponsible” and “unpatriotic” behavior is that, at some point, he began to see political advantages to massive borrowing when combined with near-zero interest rates. The growth of entitlements is popular with many voters, especially given that 47 percent pay no federal income taxes. Politically, it proved wiser to provide free birth-control pills than to be demagogued as wanting to throw granny over a cliff. Who wants to run on giving fewer things to voters and making everyone pay more for what they receive?

Perhaps the Reagan-era notion of lower taxation could be ended only through a sense of impending calamity. As former White House chief of staff Rahm Emanuel once put it, “You never let a serious crisis go to waste. And what I mean by that it’s an opportunity to do things you think you could not do before.”

Higher taxes, weighted heavily toward the affluent, spread the wealth and correct the inequities of market-based compensation. They punish the culpable 1 percent. And they remind some that they did not build their businesses on their own. Deficits force income redistribution through changes in the tax code that in any other political climate would have proven impossible.

But beware of what you wish for. Obama has already gotten his dream of a vastly increased government, federalized health care, near-zero interest rates, and record debt to force higher taxes. The problem now is that there are not enough millionaires and billionaires to make up for the shortfall. And if interest rates rise just a bit, the debt will bury us all — fat cats and thin cats alike.

Victor Davis Hanson is an author and historian at the Hoover Institution, Stanford University. This article first ran on January 10, 2013 at Townhall.com.