Freedom Centers Constitutional and Political Freedom When You See How Cruz’s Children Were Depicted i ...

When You See How Cruz’s Children Were Depicted in WaPo Cartoon, You’ll Understand Why He’s Not Happy 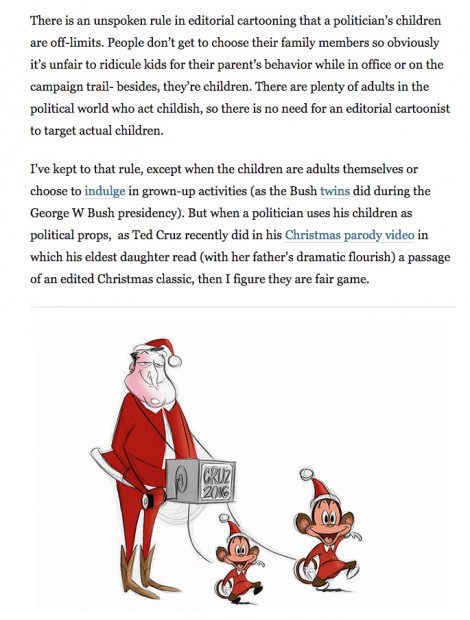 Ann Telnaes, a Pulitzer Prize winning cartoonist, argued that because the Texas senator had used his children as “political props” in a recent Christmas parody infomercial they were “fair game.”

Classy. @washingtonpost makes fun of my girls. Stick w/ attacking me–Caroline & Catherine are out of your league. https://t.co/N61ys6z8w1

A representative for the Post could not be reached for comment in time for publication by TheBlaze.

The Washington Post has since retracted the cartoon and replaced it with an editor’s note from Fred Hiatt. It reads:

It’s generally been the policy of our editorial section to leave children out of it. I failed to look at this cartoon before it was published. I understand why Ann thought an exception to the policy was warranted in this case, but I do not agree.