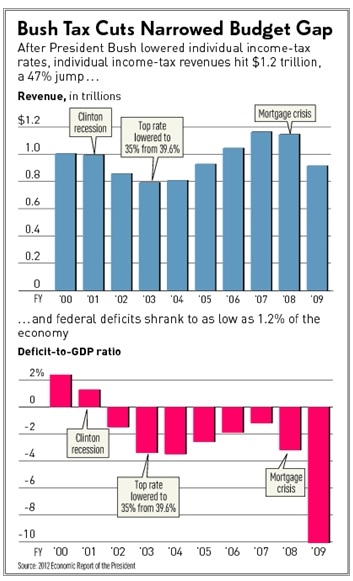 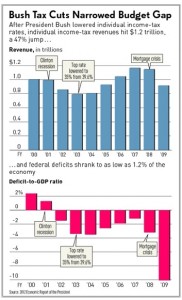 The Washington media by and large share these assumptions. And they’re driving the debate over what to do about the federal budget crisis before Jan. 1, when the tax cuts and spending programs are set to expire.

But the assumptions are faulty, based largely on political demagoguery rather than hard numbers — including ones certified by Obama’s own fiscal policy advisers and bean counters in the White House.

Turn to Pages 411-413 of his 2012 Economic Report of the President, published by the Council of Economic Advisers. They show that “the math,” as Obama is wont to say, in fact does add up for tax cuts. After President Bush in late May 2003 signed the largest tax cut since President Reagan — including dropping the top marginal rate to 35% from 39.6% — government receipts from individual income taxes rose from $793.7 billion to a peak of $1.16 trillion in 2007, when the mortgage crisis began, a 47% jump. Stronger economic growth expanded the tax base and brought in so much revenue that Bush more than halved the deficit over that period. The budget gap plunged to $160.7 billion from $377.6 billion, according to the president’s report.

Perhaps the most impressive statistic appears on Page 412, one that undercuts Obama’s core argument against continuing the Bush tax cuts. The post-tax-cut surge in economic growth and tax revenues helped drive down the deficit from 3.5% of gross domestic product in 2004 to 2.6% in 2005, to 1.9% in 2006 and to a manageable 1.2% in 2007. Based on Bush fiscal policies, the nonpartisan Congressional Budget Office projected budget deficits of 0.7% to 1.5% of GDP for the years 2008 through 2011. The CBO even predicted surpluses for the subsequent years through 2018.

What derailed the forecast was the subprime mortgage crisis of 2008.

This financial anomaly threw the economy into a deep recession, beginning in December 2007, and forced a collapse in federal tax revenues. As a result, the deficit-to-GDP ratio shot up to 10% in 2009 and has remained around that level, thanks to record Obama spending. (The recession technically ended in June 2009.)

Obama’s economic report shows that the average deficit-to-GDP ratio during the entire Bush administration — 2001 to 2009 — was 2%, which is well below the 50-year average of 3%.

During the Obama years, in contrast, the same deficit ratio has averaged 9.1%.

The Bush tax cuts did not “cost” the Treasury revenues. Nor did they increase income inequality. When fully implemented, they increased the portion of the income tax burden that fell on the wealthiest Americans. The top 1% of taxpayers went from paying 38.4% of overall taxes to 39.1%, while the bottom 50% saw their share drop from 3.4% to 3.1%. And as a percentage of the economy, deficits shrank to historically low levels. Record red ink flowed much later as the housing market toppled and government spending shot up.

Yet he proposes backloading any promised spending controls while front-loading “revenue increases” from tax hikes.