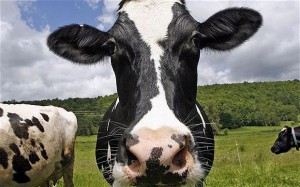 As part of its plan to reduce U.S. greenhouse gas emissions, the Obama administration is targeting the dairy industry to reduce methane emissions in their operations.

This comes despite falling methane emission levels across the economy since 1990.

The White House has proposed cutting methane emissions from the dairy industry by 25 percent by 2020. Although U.S. agriculture only accounts for about 9 percent of the country’s greenhouse gas emissions, according to the Environmental Protection Agency, it makes up a sizeable portion of methane emissions — which is a very potent greenhouse gas.

Some of these methane emissions come from cow flatulence, exhaling and belching — other livestock animals release methane as well.

“Cows emit a massive amount of methane through belching, with a lesser amount through flatulence,” according to How Stuff Works. “Statistics vary regarding how much methane the average dairy cow expels. Some experts say 100 liters to 200 liters a day… while others say it’s up to 500 liters… a day. In any case, that’s a lot of methane, an amount comparable to the pollution produced by a car in a day.”

“Of all domestic animal types, beef and dairy cattle were by far the largest emitters of [methane],” according to an EPA analysis charting greenhouse gas emissions in 2012. Cows and other animals produce methane through digestion, which ferments the food of animals.

“During digestion, microbes resident in an animal’s digestive system ferment food consumed by the animal,” the EPA notes. “This microbial fermentation process, referred to as enteric fermentation, produces [methane] as a byproduct, which can be exhaled or eructated by the animal.”

It’s not just the dairy industry that the Obama administration is clamping down on. The White House is looking to regulate methane emissions across the economy from agriculture to oil and gas operations — all this despite methane emissions falling 11 percent since 1990.

Methane emissions have largely been reduced because of the incentive for companies to capture it and sell it for monetary gain. Oil and gas companies, for example, have been looking for ways to increasingly capture methane leaked from drilling operations which they can then sell.

“The industry has led efforts to reduce emissions of methane by developing new technologies and equipment, and recent studies show emissions are far lower than EPA projected just a few years ago,” said Howard Feldman, head of scientific and regulatory affairs at the American Petroleum Institute. “Additional regulations are not necessary and could have a chilling effect on the American energy renaissance, our economy, and our national security.”

“Methane is natural gas that operators can bring to the market,” he added. “There is a built-in incentive to capture these emissions.”

Environmentalists have been pushing the Obama administration to crack down on methane emissions for some time, arguing that they drive global warming and pollute the air and water. Activists have argued that the methane leakage rate from natural gas operations is 50 percent higher than the EPA estimates.

“President Obama’s plan to reduce climate-disrupting methane pollution is an important step in reining in an out of control industry exempt from too many public health protections,” Deborah Nardone, campaign director of the Sierra Club’s Keeping Dirty Fuels in the Ground campaign. “However, even with the most rigorous methane controls and monitoring in place, we will still fall short of what is needed to fight climate disruption if we do not reduce our reliance on these dirty fossil fuels.”

Republicans and the oil and gas industry argue that the methane leakage rate has been estimated to be 50 times lower than the EPA’s estimate. The GOP argues that the EPA’s estimate is simply an attack on hydraulic fracturing, or fracking.

“The EPA has been on a witch hunt to shut down hydraulic fracturing, and yet again the evidence doesn’t back up their excessive claims,” said Louisiana Republican Sen. David Vitter. “All too often we see the Agency using flawed science for political purposes, but this report – partially funded by environmental activists no less – shows EPA’s emissions estimates from hydraulic fracturing are way off.”

Michael Bastasch is a contributor at The Daily Caller.