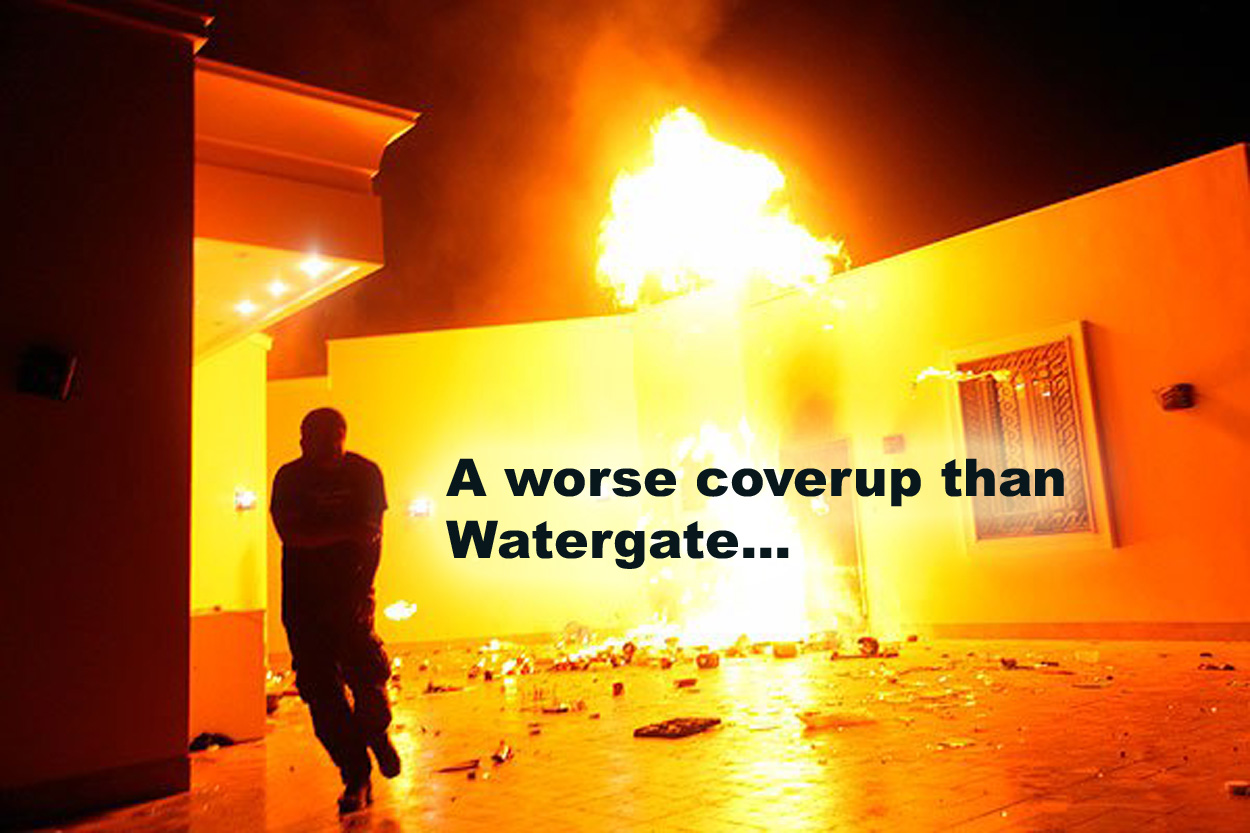 ‘The entire reason that this has become the political topic it is is because of Mitt Romney and Paul Ryan.”

Thus, Stephanie Cutter, President Obama’s deputy campaign manager, speaking on CNN about an armed attack on the 9/11 anniversary that left a U.S. consulate a smoking ruin and killed four diplomatic staff, including the first American ambassador to be murdered in a third of a century. To discuss this event is apparently to “politicize” it and to distract from the real issues the American people are concerned about. For example, Obama spokesperson Jen Psaki, speaking on board Air Force One on Thursday: “There’s only one candidate in this race who is going to continue to fight for Big Bird and Elmo, and he is riding on this plane.”

She’s right! The United States is the first nation in history whose democracy has evolved to the point where its leader is provided with a wide-body transatlantic jet in order to campaign on the vital issue of public funding for sock puppets….

Obviously, Miss Cutter is right: A healthy mature democracy should spend its quadrennial election on critical issues like the Republican party’s war on puppets rather than attempting to “politicize” the debate by dragging in stuff like foreign policy, national security, the economy, and other obscure peripheral subjects. But, alas, it was her boss who chose to “politicize” a security fiasco and national humiliation in Benghazi. At 8:30 p.m., when Ambassador Stevens strolled outside the gate and bid his Turkish guest good night, the streets were calm and quiet. At 9:40 p.m., an armed assault on the compound began, well planned and executed by men not only armed with mortars but capable of firing them to lethal purpose — a rare combination among the excitable mobs of the Middle East. There was no demonstration against an Islamophobic movie that just got a little out of hand. Indeed, there was no movie protest at all. Instead, a U.S. consulate was destroyed and four of its personnel were murdered in one of the most sophisticated military attacks ever launched at a diplomatic facility.

This was confirmed by testimony to Congress a few days ago, although you could have read as much in my column of four weeks ago. Nevertheless, for most of those four weeks, the president of the United States, the secretary of state, the U.S. ambassador to the United Nations, and others have persistently attributed the Benghazi debacle to an obscure YouTube video — even though they knew that the two events had nothing to do with each other by no later than the crack of dawn Eastern time on September 12, by which point the consulate’s survivors had landed safely in Tripoli.

To “politicize” means “to give a political character to.” … [M]edia outlets fret that Benghazi could be “bad” for Obama — by which they mean he might be hitting the six-figure lecture circuit four years ahead of schedule. But for Chris Stevens, Sean Smith, Glen Doherty, and Tyrone Woods, it’s real bad. They’re dead, over, gonesville. Given that Obama and Secretary Clinton refer to Stevens pneumatically as “Chris,” as if they’ve known him since third grade, why would they dishonor the sacrifice of their close personal friend by peddling an utterly false narrative as to why he died? You want “politicization”? Secretary Clinton linked the YouTube video to the murder of her colleagues even as the four caskets lay alongside her at Andrews Air Force Base — even though she had known for days that it had nothing to do with it. It’s weird enough that politicians now give campaign speeches to returning coffins. But to conscript your “friend”’s corpse as a straight man for some third-rate electoral opportunism is surely as shriveled and worthless as “politicization” gets.

In the vice-presidential debate, asked why the White House spent weeks falsely blaming it on the video, Joe Biden took time off between big toothy smirks to reply: “Because that was exactly what we were told by the intelligence community.” That too is false. He also denied that the government of which he is nominally second-in-command had ever received a request for additional security. At the risk of “politicizing” things, this statement would appear also to be untrue.

Instead, the State Department outsourced security for the Benghazi consulate…. Unfortunately, the one-year contract for consulate security was only $387,413…. On that budget, you … have to make do with the neighborhood talent pool. So who’s available? [They] hired five [Benghazi locals] and equipped them with handcuffs and batons. A baton is very useful when someone is firing an RPG at you, at least if you play a little baseball. There were supposed to be four men heavily armed with handcuffs on duty that night, but, the date of September 11 having no particular significance in the Muslim world, only two guards were actually on shift.

Let’s pause right there, and “politicize” a little more. Liberals are always going on about the evils of “outsourcing” and “offshoring” — selfish vulture capitalists like Mitt shipping jobs to cheap labor overseas just to save a few bucks. How unpatriotic can you get! So now the United States government is outsourcing embassy security…. Diplomatic facilities are U.S. sovereign territory — no different … from Fifth Avenue or Mount Rushmore. So defending them is one of the core responsibilities of the state. But that’s the funny thing about Big Government: The bigger it gets, the more of life it swallows up, the worse it gets at those very few things it’s supposed to be doing. So, on the first anniversary of 9/11 in a post-revolutionary city in which Western diplomats had been steadily targeted over the previous six months, the government of the supposedly most powerful nation on earth entrusted its security to Abdulaziz Majbari, 29, and his pal, who report to some bloke back in …Wales.

In the days before the attack Joe Biden had been peddling his Obama campaign slogan that “bin Laden is dead and General Motors is alive.” The first successful terrorist attack on U.S. sovereign territory since 9/11, and on the very anniversary and by al-Qaeda-linked killers, was not helpful to the Obama team. And so the nature of the event had to be “politicized”: Look, over there — an Islamophobic movie! “Greater love hath no man than this,” quoth the president at Chris Stevens’ coffin, “that a man lay down his life for his friends.” Smaller love hath no man than Obama’s, than to lay down his “friend” for a couple of points in Ohio.