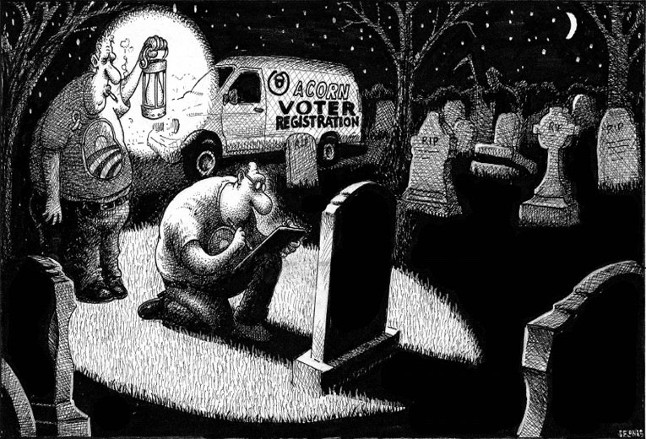 During last year’s election, the president voiced what we know — that voter fraud exists. The only question is to what degree, and that’s the mission of the commission.

For anyone who dismisses concerns about voter fraud, the unhinged reaction by the left at investigating it should, at the very least, make a logical person wonder what they’re so concerned about.

After all, if you believe the issue is false, or at the most an irrelevant factor in end results, you should welcome confirmation of that fact. Unless, of course, one fears the actual outcome may prove how voter fraud impacts local and state races to the point of shifting the balance of power in Washington, D.C.

Kris Kobach, the Kansas secretary of state and vice chairman of the president’s commission, has already caused quite the stir. In a Breitbart article, Mr. Kobach revealed that out-of-state voters may have changed not only the outcome of the New Hampshire U.S. Senate race, but also could have impacted who won the state’s presidential contest.

Mr. Kobach’s assertion is quite simple and demands an investigation, which is exactly what the commission will do. He noted that New Hampshire is a state with same-day voter registration, which eliminates the ability to determine the eligibility of those voters. He said that last year there were 6,540 same-day registrants with out-of-state driver’s licenses.

This number, Mr. Kobach pointed out, is large enough to have made the difference in the state’s U.S. Senate race as well as the presidential election. Hillary Clinton won the swing state by only 2,738 votes. Incumbent Republican Kelly Ayotte lost her Senate seat to Democrat Maggie Hassan by the slim margin of 1,017 votes.

Some critics of Mr. Kobach’s assertion argue that the driver’s license issue could reflect voting by out-of-state college students who live in New Hampshire. Sure, that’s possible, so let’s find out, shall we?
Liberals usually claim if there is fraud, it’s so small and isolated that it doesn’t impact end results. The margins in New Hampshire prove the falsity of that argument.

This issue and others were discussed in Manchester on Tuesday, as a cacophony of liberal whiners and harpies demanded a dismantling of the commission itself.

Because, you know, it’s just so much easier to burn down something with which you disagree. Just ask the #Resist gang antifa.

The ACLU’s farcical headline serves as a good example of how panicked the left really is: “Kris Kobach Pushes Voter Fraud Lies While Meeting With Fellow Suppression Activists.”

Looks like they ran out of room for “Klan,” “Nazi,” and “Puppy killers.”

Prior to this week’s meeting, Stephen Dinan of The Washington Times reported on the thousands of comments that have poured into the commission.

“For a problem that critics say doesn’t exist, Americans seem to have a lot of stories of voter fraud or the potential for it. They are sharing those stories with President Trump’s voter integrity commission as it wades into one of the administration’s thorniest fights,” Mr. Dinan reported.

“Democrats have vowed to use the legislative process to try to derail the commission. Last month, Senate Minority Leader Charles E. Schumer of New York compared the commission to the white supremacists who marched in Charlottesville, Virginia, and said he would try to eliminate the panel as part of a must-pass bill,” The Times noted.

Why so afraid, Chuck?

The issue of voter fraud must be addressed so every voter can be sure that their right as a citizen is not being erased by a fraudulent vote. Last year, this newspaper reported on a variety of fraudulent situations demanding reviews, including dead people voting in Colorado, illegals voting in Virginia, some Pennsylvania citizens voting twice, underage voters voting in the Wisconsin primary, and vote rigging in Texas.

Meanwhile, “[A] Heritage Foundation database tracking documented voter fraud now contains 492 cases and 773 criminal convictions, with untold other cases unreported and unprosecuted,” the National Review reported.
“Across the country, as Heritage’s database shows, voter-fraud convictions include everything from impersonation fraud and false registrations to ineligible voting by felons and noncitizens. American voter fraud continues apace, and the United States remains one of the only democracies in the world without a uniform requirement for voter identification,” the magazine continued.

Democrats and their allies are afraid of something — an end to a scheme that they have relied on for far too long. And now, with the president’s voter fraud commission and the tenacity of people like Mr. Kobach, perhaps they’re also afraid of losing a Senate seat and an increase of Mr. Trump’s 2016 electoral college victory.