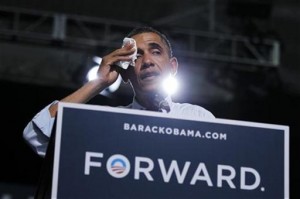 Hope needs more time. That was President Barack Obama’s message in his acceptance speech at the Democratic National Convention Thursday night. But a country that was forced to live on hope for four years and rewarded with dreary unemployment, falling middle class income and depressed home values may not be ready for another dose of lofty national goals based on nothing more than oratory.

One million new manufacturing jobs, 600,000 natural gas jobs, 100,000 math and science teachers. Oil imports cut in half, exports doubled. Cut the growth in college tuition in half and reduce the deficit by more than $4 trillion over a decade.

These were among the goals enunciated by Obama and cheered by enthralled Democrats. But millions of Americans weary of the Obama economy may have heard echoes of past Obama goals — pass my $830 billion stimulus and unemployment won’t go over 8 percent, I’ll cut the deficit in half by the end of my first term, I’ll pass immigration reform in the first year of my administration, Solyndra is America’s energy future.

The payoff: 42 months of joblessness above 8 percent, deficits soaring to a trillion-dollars a year sending the national debt to $16 trillion, immigration reform gone with Obama’s words, Solyndra a bankrupt failure costing the taxpayers half a billion dollars.

“I won’t pretend the path I’m offering is quick and easy. I never have,” Obama thundered to adoring Democrats in Charlotte. Maybe, but he’s never flinched from offering grandiose ambitions. On winning the 2008 Democratic primaries, Obama declared our children would remember that “this was the moment when the rise of the oceans began to slow and our planet began to heal.”

Fixing the economy would seem to be small potatoes compared to restraining the surge of oceans. I don’t know the state of sea levels but poll after poll registers dissatisfaction with the economy — by a nearly two-to-one margin voters think the nation is on the wrong track.

The new argument, voiced by former President Bill Clinton, is that Obama inherited a recession so bad that no president could fix it in four years. Those of us with longer memories can recall the economic mess Ronald Reagan inherited in 1980. It was called stagflation — a nightmarish mix of soaring inflation, a weakening economy, high oil prices and rising unemployment. Reagan didn’t offer “easy” measures but tough medicine in raising interest rates to choke inflation. Then he added lower taxes. They came together in an economy improving so much by his re-election campaign that he could proclaim “morning in America” and go on to win a second term in a landslide. There was no whining about the calamity he inherited, no excuses about why he hadn’t done better and no pleas for the voters to give him a second chance.

Obama and Clinton tried to beguile the voters with soaring, emotional oratory. But voters have heard it before. This time they might be thinking about results. They might look at Mitt Romney and see success — success in starting familiar businesses like Staples, success in rescuing the 2002 Salt Lake City Olympics from financial ruin, success in political bipartisanship as a Republican governor who ran a Democratic state.

To paraphrase the Beatles song, Obama’s words may give us a thrill, but they don’t pay the bills — or create jobs.

Mr. Huntley’s article was first published in the Chicago Sun-Times on Sept. 7, 2012.