Why President Obama and Democrats Want a Government Shutdown 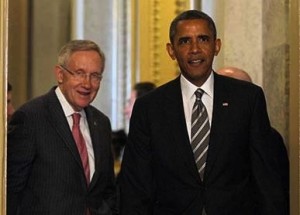 The short narrative, compiled by people with even shorter memories, is that the United States government got to the brink of a shutdown because the unreasonable House Republicans refused to get over their obsession with putting an end to Obamacare before it is fully implemented.

The real story is a lot more complicated than that. To find the real start date, one has to go all the way to the Reagan administration when congressional Democrats under the late Thomas P. “Tip” O’Neill realized the only way to keep the liberal welfare state afloat against the onslaught of Reaganism was to abandon the law governing the spending process. Instead of budgets and authorization bills and appropriations, O’Neill and company forced on Reagan massive, year-long continuing resolutions full of things that had never been taken up before just before zero hour. They gave the president a choice: Sign it or the government shuts down.

This was the beginning of the breakdown of regular order in federal spending. It has progressed to the point where both sides have routinely used it as a strategy to force concessions from the president to raise spending, when the Democrats were in charge on Capitol Hill, and to lower it when the Republicans were in the majority.

It hasn’t been all bad. Under Newt Gingrich the shutdowns forced Clinton to negotiate with the “Contract with America” Congress, produced a series of balanced budgets, a government surplus, the first re-elected Republican Congress since Herbert Hoover was president and forced Clinton to sign, on the eve of the Democratic National Convention in Chicago, welfare reform legislation that he had previously vetoed.

This is not insignificant. Political consultant Dick Morris, who was working for Clinton at the time, has said it is his belief that, had Clinton failed to sign welfare reform, he might have lost the election.

Jumping back to the current crisis, it began when the Democrats in the Senate abandoned their responsibility to produce budgets early in the Obama administration. Regular order went out the window as Senate Majority Leader Harry Reid tried to shield his fellow Democrats from having to vote, year in and year out, for higher spending as unemployment and the federal debt rose.

The current threat of a shutdown exists because neither chamber fulfilled its responsibilities under the Congressional Budget Act to produce the spending authorization and appropriations bills required by law that determine how much money the federal government will actually have to spend. Instead, these numbers have largely been determined by continuing resolutions, debt limit agreements and other negotiated settlements used in lieu of the mandated process.

The idea that the White House takes its obligations seriously is laughable. The president’ budget was delivered to Congress a month late. The Democrat-controlled Senate dithered over it while the Republicans in the House worked up their own version.

The lack of any real progress, and the reality that total federal spending was capped by a sequester that has proven significant in lowering the total amount of federal spending, meant no one was really willing to step up with a bold proposal to put the federal books back in order.

Overlaid on top of that is what the Republican majority in the House, and many but not all in the Senate, see as their mandate from the American people to repeal Obamacare. That this is also the president’s most significant achievement, his legacy legislation, means that Democrats and Republicans have continually been at loggerheads over any and all spending legislation.

Truth be told, Obama and Reid want a shutdown – unless they get everything they want. That means not just the survival of Obamacare but the busting of the spending caps so that the federal spigot can be turned back on and the money can start flowing once again to the constituent groups that are such an important part of the Democrat’s electoral coalition. Anyone who doubts this should just look at the way the White House has been handing out waivers on Obamacare and to whom. In the political sense, they’re the next best thing to cash.

There are some in the conservative coalition who really do want to force a government shutdown as they see it as the only way, the last gasp if you will, to stop Obamacare before it starts to be implemented. What most of the Washington punditocracy won’t tell you is that the White House, Harry Reid and the Democrats want a shutdown just as much if not more They see it as the pathway back to control of the House after the 2014 election, which would allow Obama to finish his term much the same way he started it – with no checks and balances on him whatsoever.

With less than 24 hours to go before the end of the current fiscal year, it is highly likely there will be a shutdown – even if it is a brief one. Both parties will be looking at the polls to see who is getting the blame. If it falls on the White House, then Obama will deal.

Peter Roff is a Senior Fellow at Frontiers for Freedom, a Washington, D.C.-based public policy organization advocating on behalf of limited government. Follow him on Twitter at @PeterRoff.