Freedom Centers Constitutional and Political Freedom You Have the Right To Be Offended ...

You Have the Right To Be Offended

Gone are the days when campuses served as places where unpopular ideas could be given voice; now, universities purge ideas from the public square if they don’t fit their infantilizing sensitivity models. 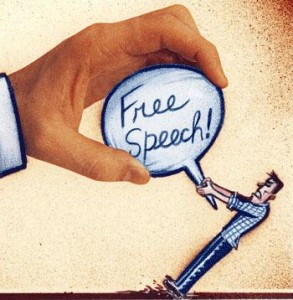 On Friday night, Grammy Award-winning rapper Macklemore found himself on the hot seat after he appeared onstage in Seattle wearing a disguise some believed incorporated traditional Jewish stereotypes. It immediately became the most offensive thing about Macklemore, at least to those who haven’t actually heard his music.

The whole controversy pitted America’s two most odious internal threats against one another: white rappers vs. the perpetually aggrieved. It is simply impossible to pick sides in such a conflict.

Fortunately, there’s only one Macklemore. Conversely, there are growing armies of people who wake up every morning intent on being offended by some aspect of their immediate world.

This has become the case in universities across America, where a movement is afoot to label classic literature with “trigger warnings” to prevent students from stumbling upon a passage that might make them uncomfortable. The movement, as reported by The New York Times, has its basis in feminist ideology; at Oberlin College, students suggested that a course’s syllabus should flag anything that might “disrupt a student’s learning” and “cause trauma,” such as passages including “racism, classism, sexism, heterosexism, cissexism, ableism and other issues of privilege and oppression.”

If the professionally aggrieved get their way, our children’s delicate psyches won’t be sullied — as 130 years of young readers’ have — by reading classics such as Mark Twain’s “The Adventures of Huckleberry Finn,” which deals with racism in the stark language used in 1884. Or Shakespeare’s “Merchant of Venice,” which treats the Jewish character of Shylock historically appropriately. These texts are historically invaluable, as they remind students what the world once was; in that sense, they serve the same purpose as modern films such as “12 Years a Slave.”

Of course, the very process of learning consists of coming into contact with ideas that cajole, discomfort and challenge. Much of the acrimony in modern politics is likely traceable to the inability of people to learn to handle opposing viewpoints; sheltering students from challenging literature out of a sense of “sensitivity” is ensuring they will remain ill-prepared when they spring forth from the womb of campus. As Greg Lukianoff of the Foundation for Individual Rights in Education told The Times, “There is a real important and serious value to being offended.”

Gone are the days when campuses served as places where unpopular ideas could be given voice; now, universities purge ideas from the public square if they don’t fit their infantilizing sensitivity models.

Take, for example, Rutgers University, which recently threw former Secretary of State Condoleezza Rice overboard when students protested her invitation to be commencement speaker. Or universities around the country that harangue students about the role “white privilege” plays in their success, as if skin color usurps their hard work in getting ahead. Or the U.S. Justice Department and the Department of Education’s Office of Civil Rights, which jointly have issued new regulations for universities that include restrictions on vague “sexually harassing speech.”

Given that the U.S. Supreme Court has yet to affirm the separation of church and sausage, Brat Fest organizers could have stuck to their guns. But Subeck evidently can’t fathom the idea of eating encased meats while others listen to a faith-based message, so she supports denying others the right to witness it.

In Madison and on university campuses, where liberals reign, the left has begun to eat its own. Some would say that on the right, the tea party is a reaction to the toothlessness of the GOP over the past 20 years; similarly, the fringe left has gotten restless and demands more influence in the places liberals wholly control.

In the early 20th century, British journalist Hannen Swaffer observed that “freedom of the press in Britain is freedom to print such of the proprietor’s prejudices as the advertisers don’t object to.”

This is where we appear to be in America at this point, with a small cadre of speech police protecting us from uncomfortable concepts. In fact, under the left’s own standard, students should be given a trigger warning to shield them from the violence being perpetrated upon the free exchange of ideas.

Christian Schneider is a Journal Sentinel columnist and blogger.