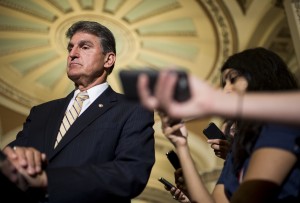 Editor’s Note:  As the Republican’s final offer to avoid a government shutdown, they passed a bill that simply gave the same one year extension to every American that Obama had already given to union and other select allies. Harry Reid and the Democratically controlled Senate refused to vote on that bill and President Obama promised that he would veto it. The media claimed the GOP bill was not a good faith or reasonable effort to solve the impasse  Now ten Democratic Senators are asking for delays in the implementation of ObamaCare. So who had the extreme and unreasonable position that forced a shutdown? That is a fair question that must now be faced by the media and by the Administration and Harry Reid.

Ten Senate Democrats have signed on to a letter crafted by Sen. Jeanne Shaheen (D-N.H.) urging the Obama administration to extend the open enrollment period for the recently launched health-care exchanges.

Shaheen called for the extension this week in light of myriad problems with the HealthCare.gov Web site.

As of now, Americans are required to obtain health insurance by March 31 or will face a penalty under the individual mandate. Some have suggested the penalty could be delayed, given the problems with the Web site might prevent people who otherwise want insurance from obtaining it.

The White House on Wednesday announced it would give Americans six weeks longer than previously thought — until March 31 — to enroll before facing a penalty, but also said the change had nothing to do with the Web site problems.

“Extending this period will give consumers critical time in which to become familiar with the website and choose a plan that is best for them,” the letter states. “Individuals should not be penalized for lack of coverage if they are unable to purchase health insurance due to technical problems.”

The letter doesn’t state how long the senators would like to extend open enrollment, only that it should be beyond March 31. One of the signers, Sen. Kay Hagan (D-N.C.), called for a two-month delay in remarks on Thursday. Separately, another Democratic senator, Joe Manchin (W.Va.), has called for a one-year delay in the individual mandate.

Begich, Pryor, Landrieu and Hagan are all top GOP targets in red states in 2014, and Bennet is likely to be targeted in 2016. (Shaheen and Mark Udall face reelection in swing states in 2014 but aren’t considered among Republicans’ top targets.)

Feinstein stands out as a long-time liberal senator from California. Tom Udall is considered largely safe for reelection in New Mexico next year and Heinrich was just elected in 2012 in the same state.

Here’s the text of Shaheen’s letter:

When fully implemented, the Affordable Care Act represents a bold step forward in reforming our nation’s health care system. It has the potential to improve the quality of care we all receive and provides the opportunity for millions of Americans to purchase quality, affordable health insurance.

The newly created federal and state health insurance marketplaces are intended to allow consumers the opportunity to compare health insurance options and find a plan that fits their needs and their budgets. For three years, we have been eagerly waiting for the launch of these marketplaces. However, now that the marketplaces are open, we have become discouraged and frustrated with the problems and interactions that are occurring with the Affordable Care Act’s federally-administered website, healthcare.gov.

As long as these substantial technology glitches persist, we are losing valuable time to educate and enroll people in insurance plans. Our constituents are frustrated, and we fear that the longer the website is not functional, opportunities for people to log on, learn about their insurance choices, and enroll will be lost.

Given the existing problems with healthcare.gov and other state-run marketplace websites that depend on the federally-administered website, we urge you to consider extending open enrollment beyond the current end date of March 31, 2014. Extending this period will give consumers critical time in which to become familiar with the website and choose a plan that is best for them. Individuals should not be penalized for lack of coverage if they are unable to purchase health insurance due to technical problems.

The Affordable Care Act has already had a significant impact on the lives of millions of Americans; seniors are now paying less for their prescription drugs, critical preventive care services are available for free and important work is being done to improve the quality of care we receive. Americans will now have the opportunity to receive tax credits to purchase quality health insurance, and starting in January 2014, insurance companies will no longer be able to deny health coverage because of a pre-existing condition or drop coverage if someone is sick.

We appreciate your efforts to fully implement this law and look forward to working with you to accomplish that goal. Thank you for considering our requests to extend the open enrollment period if the healthcare.gov substantial technology glitches continue.

Aaron Blake covers national politics at the Washington Post, where he writes regularly for the Fix, the Post’s top political blog.