Just a three weeks ago, ObamaCare was “settled law.” What happened? 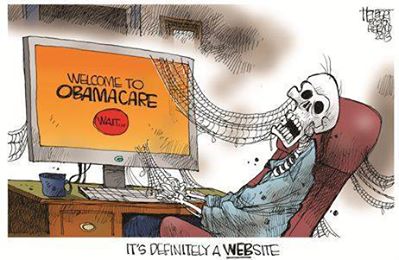 Democratic senators up for reelection in 13 months are now embracing, in their calls to delay Obamacare, the same themes as did the House Republicans and a few senators a few weeks ago—hoping to preempt mounting criticism. In this surreal landscape, three weeks ago Obamacare was unquestioned “settled” law (despite the fact that the president himself unsettled the law by suspending the employer mandate) that only dead-ender “anarchists” and “hostage takers” wished to stop or amend.

Now some Democrats apparently think the law still is fluid, and thus, as we were once reminded, want to go against the administration’s mandate of the last election, the ruling of the Supreme Court, and the majority of the Senate in stopping the federalization of health care. If the rollout of Obamacare gets any more incoherent, soon Barack Obama may be echoing the same concerns of Ted Cruz and the former naysayers in his willingness to suspend or delay his own signature legislation. At that point, do the tea-party “Taliban” become rebranded as prescient, sober and judicious legislators who provided a model for what Democrats now in Johnny-come-lately fashion emulate — or do Democrats up for reelection become obstructionists who need to get over it and move on?

Victor Davis Hanson is an American military historian, columnist, former classics professor, and scholar of ancient warfare. He has been a commentator on modern warfare and contemporary politics for National Review and other media outlets.