10 Tips to Survive Today’s College Campus, or: Everything You Need to Know About College Microaggressions 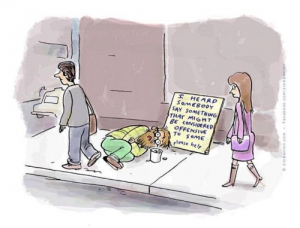 When students protesting “microaggressions” took over an administrative building at Occidental College in California, they issued 14 demands. The school agreed to all except the first, which required the firing of its president. Similar protests took place concurrently at other colleges nationwide.

Occidental’s five-day takeover was organized by Oxy United for Black Liberation, led by members of Oxy’s Black Student Alliance (BSA) and Coalition at Oxy for Diversity and Equity (CODE). Occidental says the demands they agreed to meet were:

“Increase budget of the CDO office by 50 percent.

“Allocate $60,000 to Diversity and Equity Board (DEB) to fund programming and provide resources for black and other marginalized students.

“Creation of a fully funded and staffed Black Studies program, a demand the group says ‘has not been met for over 40 years.’

“Increase percentage of tenured faculty of color by 20 percent for the 2017-18 school year, and by 100 percent over the next five years.

“Provide funding for Harambee, the student group for black men, which has not received funding in five years.

“Ensure the continued existence of the Intercultural Affairs office on campus.

“Hire physicians of color at Emmons Wellness Center to treat physical and emotional trauma associated with issues of identity.

“Meet the demands that CODE made following the arrest of a community member on September 5.”

The thesis’s author conducted a study with 47 undergraduates, but only 35 completed the survey and were included in the data: “As a result of insignificant results, as well as predominantly male participants, secondary analyses were conducted based on demographic variables, which are salient for African American male college students.” Oh.

Faculty leftists now rule the humanities departments in America’s colleges and universities. They teach victimhood. Students learn that they’ve been victims of America’s racism, sexism, homophobia, etc. So why the surprise when they begin to act like victims? And due to self-imposed or external pressure to “diversify” campuses by race and ethnicity, colleges relax customary academic standards of admission for so called “underrepresented students,” specifically blacks and Hispanics. Such students would have done fine at a less competitive school, one commensurate with their grades and test scores. But when standards are watered down, students can struggle to compete, thus becoming “academically marginalized.” Thus the very same students who “benefited” from the push for diversity then complain about the perceived “microaggressions” that supposedly hinder their success.

So, given anti-microaggression protests at places such as Dartmouth, Brown, Columbia, Occidental and University of Missouri, among others, we offer 10 Tips to Survive Today’s College Campus, or: Everything You Need to Know About College Microaggressions:

4. A student of color, except for Asians, who gets bad grades is “academically marginalized.”

5. Professors who give bad grades to students of color, except for Asians, are racists.

6. The SAT is culturally biased.

7. White male students/staff/faculty must renounce their “white male privilege” and then, well, we’ll get back to you on that.

8. If you’re white and your response to “Black Lives Matter” is that “All Lives Matter,” you’re a racist.

9. If you’re black and your response to “Black Lives Matter” is that “All Lives Matter,” you’re an “Uncle Tom.”

10. If you’re Latino and your response to “Black Lives Matter” is that “All Lives Matter,” you’re a “Tio Taco.”