Today’s student protesters start with valuable observations, writes John H. McWhorter, but then they drift into a mistaken idea of what a university—and even a society—should be 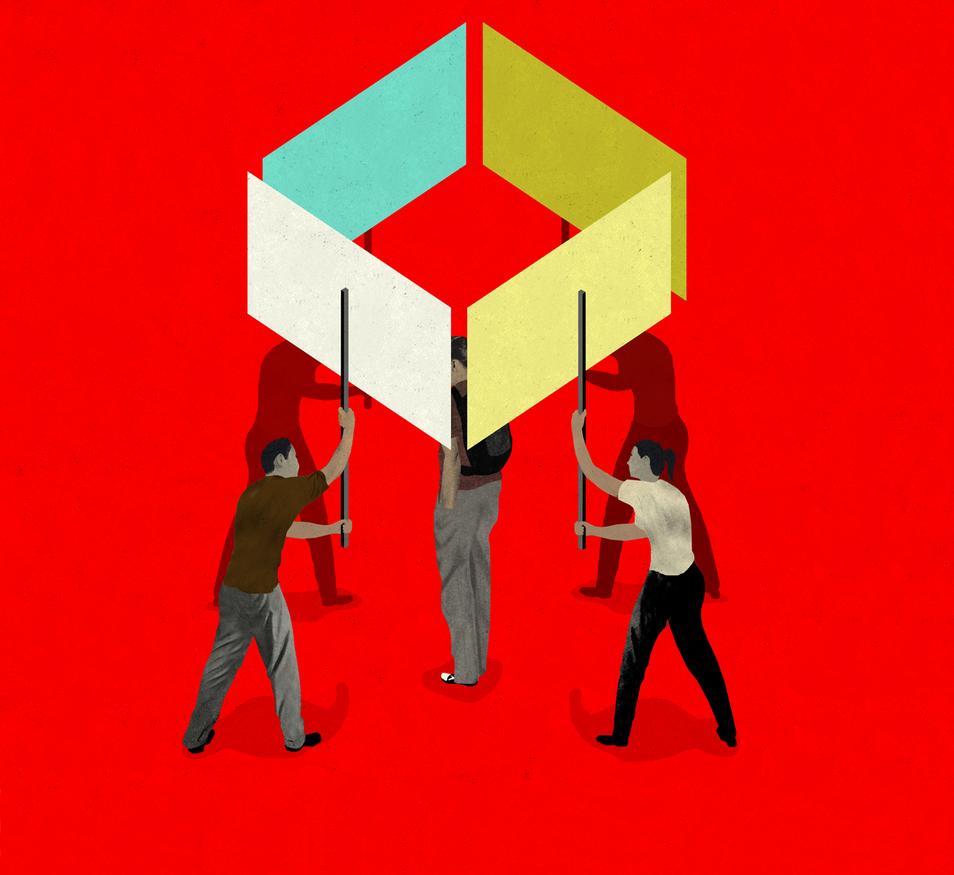 From the aggrieved pitch of recent student protests against racism, the naive observer might be surprised that we are now 50 years past the 1960s. Today’s protesters have not endured the open hostility and dismissal that James Meredith did as the first African-American student at Ole Miss in 1962, when white students turned their backs on him in the cafeteria and bounced a basketball in the room over his at all hours of the night. As a black college student in the early 1980s, my experience felt different enough from his that it never occurred to me to characterize my school, Rutgers University, as a “racist campus.”

Of course, it was part of a racist America, and so I encountered discrimination here and there. The girl at the open-mic night who opened with “What do you call 150 black people at the bottom of the ocean? A good start!” The German teacher who told me I was in the wrong class the second I walked in and openly despised me for the rest of the semester. The frat boys yelling “Zebra!” as I passed with a white girl I dated.

But I was too busy with the other 99.7% of my life to really focus on such things—maybe being an introverted geek was part of it? Under the current campus Zeitgeist, I was nevertheless behind the curve. The new idea is that even occasionally stubbing your toe on racism renders a university a grievously “unsafe space” and justifies students calling for the ouster of a lecturer who calls for reasoned discussion (Yale) and even of a dean stepping down in shame for an awkwardly worded email (Claremont McKenna).

It’s true that the civil-rights victories of the 1960s left a lot of work to do. We should not expect a black Yale student to shrug it off if a fraternity member says a party is for “white girls only,” as has been alleged. Campus police must conquer any leaning toward treating students of color like potential criminals. There is also a strong case for removing the name and face of Woodrow Wilson from Princeton’s campus, as protesters there have demanded. When I think of Wilson, I always think of him declaring that the nakedly racist 1915 film “The Birth of a Nation” was “history written with lightning” and evicting black leaders from the Oval Office for deigning to express their grievances uncompromisingly.

However, something is off about today’s student protests. The protesters may start with valuable observations, but then they drift into a mistaken idea of what a university—and even a society—should be.

Advertisement
Nowhere is this clearer than in the now-standard demand that all members of the university community attend a new battery of tutoring on the nature and power of racism. The demand at Yale is for “mandatory diversity training for faculty and staff,” plus orientation programs that “explore diversity and inclusion.” The University of Missouri protesters want a “comprehensive racial awareness and inclusion curriculum throughout all campus departments and units, faculty, staff, and administration.”

The problem is that the university campus is already one of the most exquisitely racially sensitized contexts a human being will ever encounter in America—a place where, for example, comedians such as Chris Rock have stopped performing because audiences are so P.C. In what way exactly will further workshops, teach-ins and classes on “racial sensitivity” create real change? Many students have already gone through these types of programs (as I mentioned in a short piece I wrote for the European edition of Politico last week), but the call for more of them suggests their insufficiency in the eyes of the protesters.

Since the 1980s, anyone familiar with the college campus scene knows that in private moments, undergraduates of all colors tend to wryly dismiss the “diversity” workshops they had to attend at the start of freshman year as hollow exercises. No one on record has created a program or method on “racial sensitivity” that would do a better job and transform minds in a new way. “Racial awareness training”—the words resonate. But these programs are now eons old. More of these programs would be like thinking a car will run better with more gasoline.

These protesters appear to miss how Orwellian their terms often sound; the enraged indoctrination sounds like something out of “1984,” not enlightenment. Then again, one can almost hear the protesters responding, “Well, yeah, but we really are right!” They assume that their perspective is a truth that brooks no morally conceivable objection.

The question for today’s campuses has become: What is considered unspeakable? Where do we draw the line? There are indeed some truths that civilized people would not dispute: that women should have the right to vote, that genocide is wrong. Critics who pretend university culture is open to “free speech” about all ideas are being disingenuous. These students aren’t so much trying to shut down free inquiry as they are assuming that, on this topic, it has already happened. “Racism is wrong,” they know—and we all agree. “Therefore, when it comes to that which I find offensive as a person of color, civility and discussion are beside the point.”

That second part is where these earnest students go wrong. The idea that only the naive or the immoral would question issues connected to something as broad and protean as race and racism is hasty at best and anti-intellectual at worst. What qualifies as discrimination? As cultural appropriation? As aggression? What is an ethnicity? What does racial courtesy consist of, and for what reasons? These are rich, difficult questions with no hard-and-fast answers.

Any insistence otherwise is religious. The term is unavoidable here. When intelligent people openly declare that logic applies only to the extent that it corresponds to doctrine and shoot down serious questions with buzzwords and disdain, we are dealing with a faith. As modern as these protests seem, in their way, they return the American university to its original state as a divinity school—where exegesis of sacred texts was sincerely thought of as intellection, with skepticism treated as heresy.

The impression that race-related positions are elementary tenets long resolved explains the “safe space” concept so often bandied about at universities today. Commentators harrumph that students who insist on this brand of safety are merely “whining,” but they miss the point; these students assume that any views on race and racism counter to theirs genuinely qualify as benighted and toxic. All of us seek “safety” from genuinely rancid views—how many of us would stay at a party where someone dominated the conversation with overtly racist bloviations? These students have merely overextended the bounds of the conclusively intolerable.

Another factor bolsters the mistaken impression that these protests are founded on truth rather than opinion. One may see the students as driven to a breaking point—with emotion naturally creating some excesses—by endless abuse, erupting after decades of patience. That narrative would implicitly justify the rage, profanity and perhaps even aggression (according to a Nov. 14 article in the conservative Dartmouth Review, a splinter group of black protesters at the university pushed a white student against a wall yelling, “filthy white bitch!”, though the university has said that it’s received no official reports of violence).

However, the “fed up” analysis oversimplifies history. The civil-rights movement did not have signature successes starting in the late ’50s because black people just then were uniquely “fed up.” Black people in 1875 or 1925 would have been surprised to hear that they weren’t fed up just yet. What changed the game in the Eisenhower era was a combination of television broadcasts of hideous images and the federal government’s publicity concerns during the Cold War.

In the same way, today’s student protests are not a boiling-over specific to 2015. Like television 60 years ago, social media has been an amplifying force in the debate, starting with the outcry over the failure to arrest George Zimmerman after he killed the unarmed Florida teenager Trayvon Martin. Outlets like Twitter thankfully, made this injustice a national concern in a way that would have been impossible a decade earlier, and the line is direct between this, the Ferguson protests, the Black Lives Matter movement and finally today’s campus protests.

These protests manifest not a breaking point but a mood, and much about that mood is as debatable as the protesters’ demands. Whites on campus are taught to acknowledge their “privilege” in a way that seems intended more to make them feel good about themselves than to change black people’s lives. We are to process “I don’t see color” as micro-abuse. We are to assail white gay men who adopt some black female speech mannerisms as cultural “theft.”

Much of this is easy to classify as passing fashion. It is one thing, for example, to internally check off that you “acknowledge” your privilege while buying the week’s groceries, or to read an editorial about cultural appropriation and murmur that it makes some good points. But as this perspective grows from writings and panel discussions to mass protests, verbal abuse and shamefaced resignations, we’re presented with a new challenge.

There are useful points in the students’ demands: Historical figures as especially bigoted as Wilson and John C. Calhoun should not have their names on college buildings; student organizations displaying openly racist behavior should not be a part of a college campus experience.

But where the protesters’ proposition is “If I am offended, I am correct,” the proper response is, quite simply, “No.” This and only this constitutes true respect for these students’ dignity. It isn’t an easy answer. The naysayer will be called a racist (or self-hating) on social media and on campus for months. However, adults who know that their resistance to mob ideology is based on logic and compassion will survive emotionally. Of course, such people fear for their jobs. But a true university culture will resist sacrificing professors or administrators who are advocates of reason on the altar of convenient pieties.