Freedom Centers Science and Public Policy 3 days to Al Gore’s ’10 years to save the plan ...

Americans have been hearing it for decades, wavering between belief and skepticism that it all may just be a natural part of Earth’s cyclical warming and cooling phases.

And politicians and corporations have been ignoring the issue for decades, to the point that unless drastic measures to reduce greenhouse gases are taken within the next 10 years, the world will reach a point of no return, Gore said.

He sees the situation as “a true planetary emergency.”

“If you accept the truth of that, then nothing else really matters that much,” Gore said in an interview with The Associated Press. “We have to organize quickly to come up with a coherent and really strong response, and that’s what I’m devoting myself to.”

Well, the 10 years are about up, by now, warming should have reached “planetary emergency levels” Let’s look at the data: 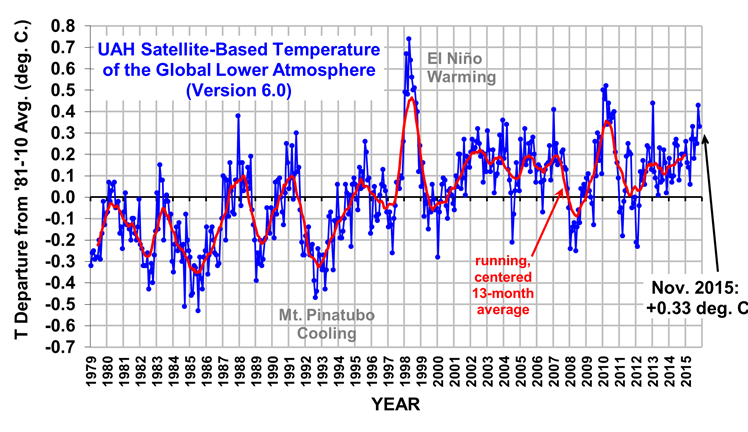 As you can see, little has changed since 2006. Note the spike in 1998, in the 18 years since the great El Niño of 97/98, that hasn’t been matched, and the current one we are in isn’t stronger, and looks to be on the way to decaying. So much for the “monster” El Niño.

Dr. John Christy recently wrote of the satellite record since 1979:

While a 0.12 C trend isn’t exactly a sprint to climate catastrophe (the 1.2 C or 2.2 degrees F rise over 100 years would be roughly equal to the warming seen most spring days between 10 a.m. and noon), it nonetheless has been a steady trend for the past several years. Take away the random variations caused by warm and cold weather systems, and any long-term trend, no matter how small, will produce climate records on a regular basis. Add to that long-term warming the additional heat of a large El Niño, and record-setting monthly average temperatures should be both routine and expected.

Despite that, early indications are that 2015 will end as the third warmest year in the satellite temperature record, behind 1998 and 2010. That is the early indication. Typically, the warmest temperatures are seen in the second year of an El Niño warming event, although there have been exceptions. If the typical pattern holds true, the second year of the current El Niño would be expected to bring more record high temperatures in 2016, perhaps including a new record high temperature for the year. 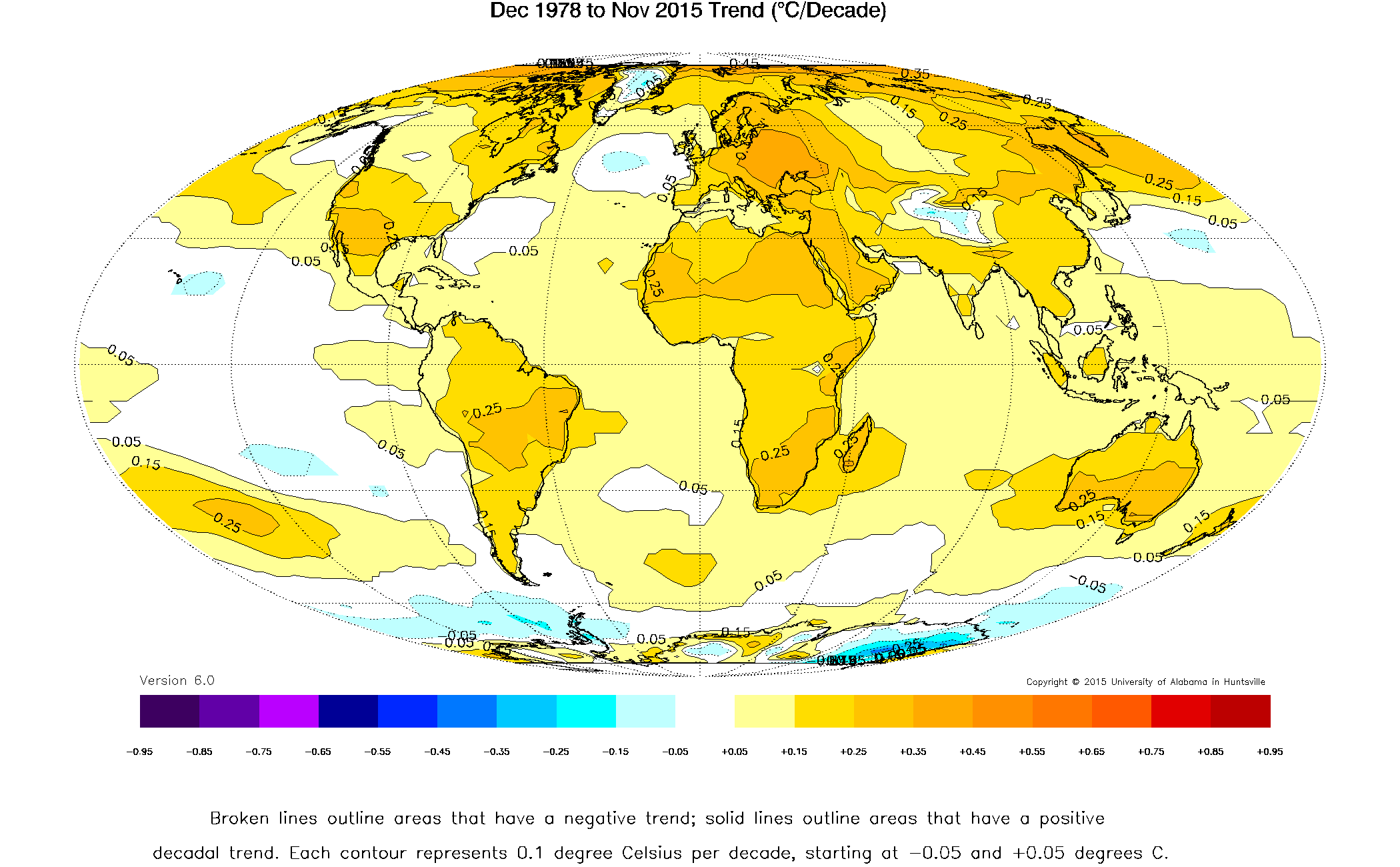 Warmer at the North pole, colder at the South pole since 1979. Source: UAH

The surface record for the last 10 years: 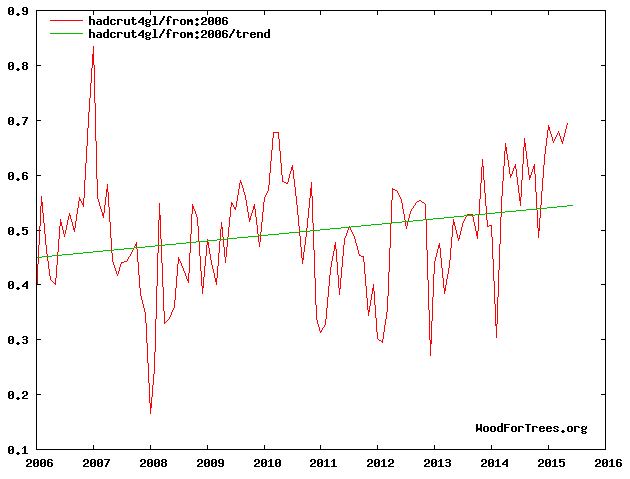 Of course, proponents of climatic catastrophe will look at that and say “Gore was right!” …except there is this small niggling problem, a fairly large El Niño in 2015, which has nothing to do with CO2 induced warming as Gore claimed ten years ago. Note the spike in 2007, in the nine years since, that hasn’t been matched.

According to Gore, this map should have been all reds now. 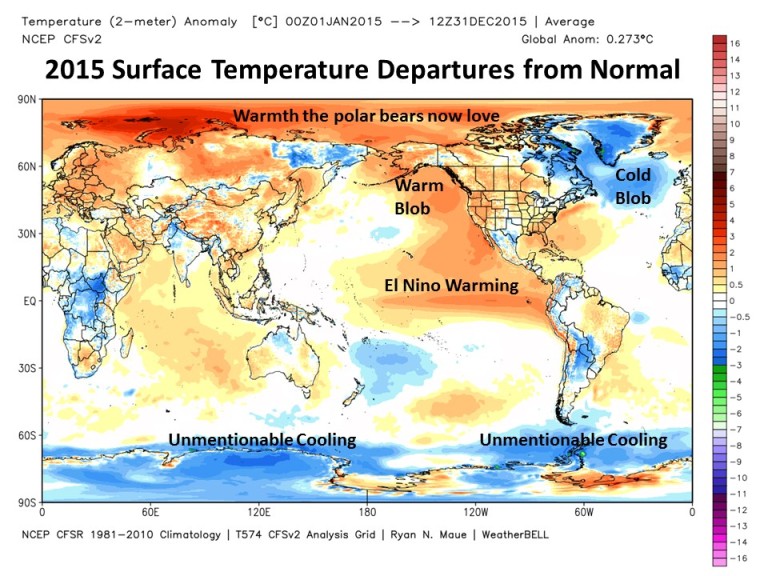 Dick Lindzen suggested to me recently that this might be a good time to address the general question, “what causes the global-average warmth during El Nino?”

Importantly, the change shows up in global average ocean computations, based upon ocean temperature data (see our Fig. 3, here); this means that the changes centered in the Pacific are not offset by changes of the opposite sign occurring in other ocean basins.

So, the big warming events of the last 10 years have been El Niño related, a natural event, and even they haven’t reached catastrophic levels of global temperature.

Al Gore’s posited “within the next 10 years, the world will reach a point of no return” and “a true planetary emergency.” is proving to be nothing more than PR bullshit to push his movie, and won’t happen by the ten year countdown of January 25th 2016.

Gaia seems to be a “Gore denier”. How inconvenient.