Freedom Centers Economic Freedom 30% of Businesses Say They Would Eliminate Jobs As ... 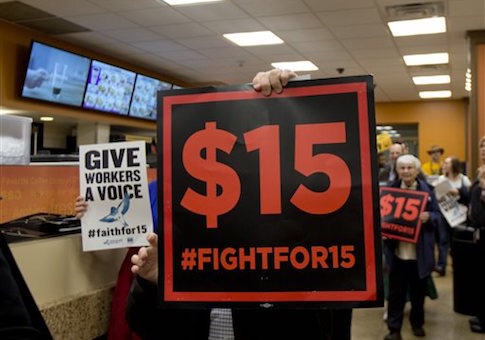 Thirty percent of businesses said they would eliminate jobs if the minimum wage were increased to $15 an hour, according to a survey from Express Employment Professionals.

The survey asked 390 businesses in the United States and Canada what effect the increase in the minimum wage would have on their operations.

A majority of the businesses surveyed, 82 percent, said they do not pay the current minimum wage for some positions while 18 percent of respondents said they do.

“A $15 minimum wage has certainly become a political hot topic,” said Bob Funk, CEO of Express Employment Professionals. “There’s no doubt it makes for a good talking point, but the real question is whether it makes good economic sense.”

“While some workers will see a raise, which is good news, this survey shows that there are clear negative consequences for raising the wage to $15,” said Funk, who was also a former chairman of the Federal Reserve Bank of Kansas City. “Policymakers should always keep in mind the unintended consequences of their actions.”