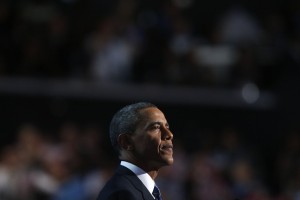 Obama is out of ideas, and Clinton’s speech was unworthy of him.

Barack Obama is deeply overexposed and often boring. He never seems to be saying what he’s thinking. His speech Thursday was weirdly anticlimactic. There’s too much buildup, the crowd was tired, it all felt flat. He was somber, and his message was essentially banal: We’ve done better than you think. Who are you going to believe, me or your lying eyes?

There were many straw men. There were phrases like “the shadow of a shuttered steel mill,” which he considers writerly. But they sound empty and practiced now, like something you’ve heard in a commercial or an advertising campaign.

It was stale and empty. He’s out of juice.

His daughters have grown beautiful.

As for Joe Biden, I love him and will hear nothing against him. He’s like Democrats the way they used to be, and by that I do not mean idiotic, I mean normal—manipulative only to a normal degree, roughly aware of the facts of normal life, alert to and even respecting of such normal things as religious faith. I wish he did not insist on referring to his wife as “Dr. Jill Biden.” I’m sure she has many doctorates, but so do half the unemployed in Manhattan.

John Kerry was on fire. It was the best speech of his career. He drew blood on foreign policy: “Talk about being for it before you were against it!” Obama will take that message, on Afghanistan, into debate.

Was it a good convention?

Beneath the funny hats, the sweet-faced delegates, the handsome speakers and the babies waving flags there was something disquieting. All three days were marked by a kind of soft, distracted extremism. It was unshowy and unobnoxious but also unsettling.

There was the relentless emphasis on Government as Community, as the thing that gives us spirit and makes us whole. But government isn’t what you love if you’re American, America is what you love. Government is what you have, need and hire. Its most essential duties—especially when it is bankrupt—involve defending rights and safety, not imposing views and values. We already have values. Democrats and Republicans don’t see all this the same way, and that’s fine—that’s what national politics is, the working out of this dispute in one direction or another every few years. But the Democrats convened in Charlotte seemed more extreme on the point, more accepting of the idea of government as the center of national life, than ever, at least to me.

The fight over including a single mention of God in the platform—that was extreme. The original removal of the single mention by the platform committee—extreme. The huge “No!” vote on restoring the mention of God, and including the administration’s own stand on Jerusalem—that wasn’t liberal, it was extreme. Comparing the Republicans to Nazis—extreme. The almost complete absence of a call to help education by facing down the powers that throw our least defended children under the school bus—this was extreme, not mainstream.

The sheer strangeness of all the talk about abortion, abortion, contraception, contraception. I am old enough to know a wedge issue when I see one, but I’ve never seen a great party build its entire public persona around one. Big speeches from the heads of Planned Parenthood and NARAL, HHS Secretary and abortion enthusiast Kathleen Sebelius and, of course, Sandra Fluke.

“Republicans shut me out of a hearing on contraception,” Ms. Fluke said. But why would anyone have included a Georgetown law student who never worked her way onto the national stage until she was plucked, by the left, as a personable victim?

What a fabulously confident and ingenuous-seeming political narcissist Ms. Fluke is. She really does think—and her party apparently thinks—that in a spending crisis with trillions in debt and many in need, in a nation in existential doubt as to its standing and purpose, in a time when parents struggle to buy the good sneakers for the kids so they’re not embarrassed at school . . . that in that nation the great issue of the day, and the appropriate focus of our concern, is making other people pay for her birth-control pills. That’s not a stand, it’s a non sequitur. She is not, as Rush Limbaugh oafishly, bullyingly said, a slut. She is a ninny, a narcissist and a fool.

And she was one of the great faces of the party in Charlotte. That is extreme. Childish, too.

Something else, and it had to do with tone. I remember the Republicans in Tampa bashing the president, hard, but not the entire Democratic Party. In Charlotte they bashed Mitt Romney, but they bashed the Republican Party harder. If this doesn’t strike you as somewhat unsettling, then you must want another four years of all war all the time between the parties. I don’t think the American people want that. Because, actually, they’re not extreme.

Bill Clinton is The Master. That is stipulated. Almost everyone in the media was over the moon about his speech. It was a shrewd and superb moment of political generosity, his hauling into town to make the case, but it was a hack speech. It was the speech of a highly gifted apparatchik. All great partisan speeches include some hard and uncomfortable truths, but Mr. Clinton offered none. He knows better than so much of what he said. In real life he makes insightful statements on the debt, the deficit and the real threat they pose. He knows more about the need for and impediments to public-school reform than half the reformers do. He knows exactly why both parties can’t reach agreement in Washington, and what each has done wrong along the way. But Wednesday night he stuck to fluid fictions and clever cases. It was smaller than Bill Clinton is.

Still, he gave the president one great political gift: He put Medicaid on the table. He put it right there next to the pepper shaker and said Look at that! People talk Medicare and Social Security, but, as Mr. Clinton noted, more than half of Medicaid is spent on nursing-home care for seniors and on those with disabilities such as Down syndrome and autism. Will it be cut?

Here’s what I’m seeing the past 10 years. The baby boomers have been supporting their grown children and their aged parents. They are stressed, stretched and largely uncomplaining, because they know that as boomers—shallow, selfish—they’re the only generation not allowed to complain. And just as well, as complaints are the only area of national life where we have a surplus. But they are spiritually and financially holding the country together, and they’re coming to terms with the fact that it’s going to be that way for a good long time. They’re going to take a keen interest in where Medicaid goes.

Romney-Ryan take note: this will arrive as an issue.

So: was it a good convention? We’ll know by the polls, by the famous bounce, or lack of it. A guess? Dead-cat bounce. Just like the Republicans got.

Maybe Mr. Clinton made a bigger, more broadly positive impression than I suspect; maybe a sense the Democrats were extreme will take hold. People left both conventions talking about only one thing: the debates. They know they didn’t move the needle in Tampa and Charlotte. The people in charge of politics aren’t so good at politics anymore.

This article was originally published in The Wall Street Journal on September 7, 2012.