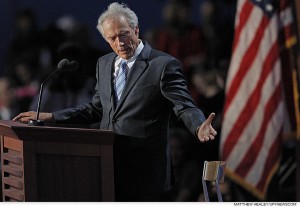 After a week as topic No. 1 in American politics, former Carmel Mayor Clint Eastwood said the outpouring of criticism from left-wing reporters and liberal politicians after his appearance at the Republican National Convention last Thursday night, followed by an avalanche of support on Twitter and in the blogosphere, is all the proof anybody needs that his 12-minute discourse achieved exactly what he intended it to.

“President Obama is the greatest hoax ever perpetrated on the American people,” Eastwood told The Pine Cone this week. “Romney and Ryan would do a much better job running the country, and that’s what everybody needs to know. I may have irritated a lot of the lefties, but I was aiming for people in the middle.”

For five days after he thrilled or horrified the nation by talking to an empty chair representing Obama on the night Mitt Romney accepted the Republican nomination for president, Eastwood remained silent while pundits and critics debated whether his remarks, and the rambling way he made them, had helped or hurt Romney’s chances of winning in November.

But in a wide-ranging interview with The Pine Cone Tuesday from his home in Pebble Beach, he said he had conveyed the messages he wanted to convey, and that the spontaneous nature of his presentation was intentional, too.

“I had three points I wanted to make,” Eastwood said. “That not everybody in Hollywood is on the left, that Obama has broken a lot of the promises he made when he took office, and that the people should feel free to get rid of any politician who’s not doing a good job. But I didn’t make up my mind exactly what I was going to say until I said it.”

Eastwood’s appearance at the convention came after a personal request from Romney in August, soon after Eastwood endorsed the former Massachusetts governor at a fundraiser in Sun Valley, Idaho. But it was finalized only in the last week before the convention, along with an agreement to build suspense by keeping it secret until the last moment.

Meanwhile, Romney’s campaign aides asked for details about what Eastwood would say to the convention.

“They vett most of the people, but I told them, ‘You can’t do that with me, because I don’t know what I’m going to say,’” Eastwood recalled.

And while the Hollywood superstar has plenty of experience being adored by crowds, he said he hasn’t given a lot of speeches and admitted that, “I really don’t know how to.” He also hates using a teleprompter, so it was settled in his mind that when he spoke to the 10,000 people in the convention hall, and the millions more watching on television, he would do it extemporaneously.
“It was supposed to be a contrast with all the scripted speeches, because I’m Joe Citizen,” Eastwood said. “I’m a movie maker, but I have the same feelings as the average guy out there.”

Eastwood is a liberal on social issues such as gay marriage and abortion, but he has strongly conservative opinions about the colossal national debt that has accumulated while Obama has been president, his failure to get unemployment below 6 percent, and a host of other economic issues.

“Even people on the liberal side are starting to worry about going off a fiscal cliff,” Eastwood said.

But what — exactly — would he say to the Republican delegates about the $16 trillion national debt and 8.3 percent unemployment rate?

Friends and associates weren’t as much help as he had hoped.

“Everybody had advice for me, except the janitor,” Eastwood said.

Early Thursday morning, when Eastwood left San Jose Airport on a private jet headed for Florida, he was still making up his mind. And even with his appearance just a few hours away, all Eastwood could tell Romney’s campaign manager, Matt Rhoades, and his aides, was “to reassure them that everything I would say would be nice about Mitt Romney.”

It was only after a quick nap in his hotel room a few blocks from the convention site, Eastwood said, that he mapped out his remarks — starting with his observation about politics in Hollywood, then challenging the president about the failure of his economic policies, and wrapping up by telling the public “they don’t have to worship politicians, like they were royalty or something.”

But even then, with just an hour before he appeared on stage, it still hadn’t occurred to Eastwood to use an empty chair as a stand-in for the president.

“I got to the convention site just 15 or 20 minutes before I was scheduled to go on,” he said. “That was fine, because everything was very well organized.”

After a quick trip through airport-style security, he was taken to a Green Room, where Archbishop Dolan of New York sought him out to say hello. Then he was taken backstage to wait for his cue. And that was when inspiration struck.

“There was a stool there, and some fella kept asking me if I wanted to sit down,” Eastwood said. “When I saw the stool sitting there, it gave me the idea. I’ll just put the stool out there and I’ll talk to Mr. Obama and ask him why he didn’t keep all of the promises he made to everybody.”

He asked a stagehand to take it out to the lectern while he was being announced.

Then, with the theme song from “The Good, the Bad and the Ugly” as a musical introduction, and a huge picture of him as Josey Wales as the backdrop, Eastwood walked out to tremendous applause.

“The audience was super enthusiastic, and it’s always great when they’re with you instead of against you,” he said.

Speaking without any notes, Eastwood recalled the good feelings the whole nation had when Obama was elected, but said they had been dashed as the economy stayed in the doldrums despite massive stimulus spending. He decried the “stupid idea” of closing the detention center at Guantanamo Bay and putting terrorists on trial in New York City, joked about Vice President Joe Biden’s intellect and quizzed empty-chair Obama about what he says to people about his failed economic policies. He pretended Obama told Romney to do something “physically impossible” to himself, said it’s time to elect a “stellar businessman” as president instead of a lawyer, and, as a final point, told the people, “You own this country.”

When an elected official doesn’t “do the job, we’ve got to let ‘em go,” he said, and the crowd ate it up.

“They really seemed to be enjoying themselves,” Eastwood said.

Originally, he was told he could speak for six or seven minutes, and right before he went on, he was asked to keep it to five, but he said, “When people are applauding so much, it takes you 10 minutes to say five minutes’ worth.”

Also, there were no signals or cues of any kind, so “when you’re out there, it’s kind of hard to tell how much time is going by.”

He also said he was aware he hesitated and stumbled a bit, but said “that’s what happens when you don’t have a written-out speech.”

As he wrapped up his remarks, he was aware his presentation was “very unorthodox,” but that was his intent from the beginning, even if some people weren’t on board.

“They’ve got this crazy actor who’s 82 years old up there in a suit,” he said. “I was a mayor, and they’re probably thinking I know how to give a speech, but even when I was mayor I never gave speeches. I gave talks.”

Backstage, it was all congratulations and glad-handing, he said. And then he returned to the Green Room, where he listened to speeches by Marco Rubio and Mitt Romney. It wasn’t possible for him to watch the media coverage of his presentation.

But the country was listening as the television reporters and commentators covering his speech reacted to it. And they hated it.

“I have to say, as a fan, a movie fan, this was exceedingly strange. It just seemed like a very strange, unscripted moment,” said a shocked Andrea Mitchell on NBC.

“That was the weirdest thing I’ve ever seen at a political convention in my entire life,” said Rachel Maddow on MSNBC, barely concealing the condescension in her voice.

Bob Schieffer of CBS said it was “a big mistake to put Clint Eastwood on before Mitt Romney.” On the Washington Post website, reporter Chris Cillizza wrote that “‘awkward’ may be the kindest term we can think of” to describe Eastwood’s speech.

“He hemmed. He hawed. He mumbled. He rambled,” Cillizza wrote.

And on CNN, Piers Morgan said Eastwood was “going bonkers” on the stage and said his presentation “looked like complete chaos.” He pressured his guests with questions like, “Weren’t you in pain while he was up there?”

But Eastwood wasn’t aware of any of it, and after the speeches were over, Romney and his running mate, Paul Ryan, came backstage to thank him.

“They were very enthusiastic, and we were all laughing,” Eastwood said.

When he went outside to his car, a large crowd cheered and chanted lines from his speech.

Back at his hotel, Eastwood had a room service dinner and went to bed. The next morning, he got up early and went straight to the airport, still unaware that his appearance was the No. 1 political topic in the nation.

“I read the Tampa newspaper, and every article said something negative about the convention, but there wasn’t much about me,” Eastwood said.

He had no idea that overnight, a rebellion had erupted online against the media’s condemnation of him, with thousands of bloggers, Twitterers and commentators calling him, “a genius,” “1,000 times more brilliant than the media,” and saying he’s “only gotten better with age.”

They also started posting their own versions of Eastwood’s empty chair in droves (“eastwooding”), and, on YouTube, replays of his remarks at the convention were being viewed millions of times.

Even into his 80s, Eastwood has an unprecedented record of success in Hollywood, and is still making two movies a year. He’s currently starring in “Trouble with the Curve,” and is about to direct a remake of “A Star is Born” — things he obviously couldn’t do if he were a befuddled senior citizen. To locals who know him, the idea that he is uninformed or senile is laughable.

Nevertheless, the bitter criticism has continued.

Eastwood said people, including reporters, who were shocked by his remarks “are obviously on the left,” and he maintained that, while many Americans didn’t like the way he handled his convention appearance, millions more have something else on their minds.

“A lot of people are realizing they had the wool pulled over their eyes by Obama,” Eastwood said.

This article was originally published at The Carmel Pine Cone.