All the President’s IRS Agents 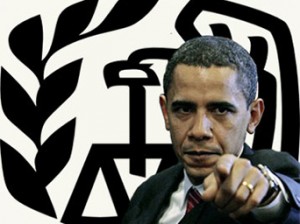 The targeting of groups opposed to the Democratic agenda has not ended—it’s gotten worse.

by Kimberly A. Strassel

Few presidents understand the power of speech better than Barack Obama, and even fewer the power of denying it to others. That’s the context for understanding the White House’s unprecedented co-option of the Internal Revenue Service to implement a political campaign to shut up its critics and its opponents.

Perhaps the biggest fiction of this past year was that the IRS’s targeting of conservative groups has been confronted, addressed and fixed. The opposite is true. The White House has used the scandal as an excuse to expand and formalize the abuse.

About a month after the IRS inspector general released his bombshell report about IRS targeting of conservative groups last May, Acting IRS Commissioner Danny Werfel unveiled a “plan of action” for correcting the mess. One highlight was that targeted groups would be offered a new optional “expedited” process for getting 501(c)(4) status.

The deal, which received little public attention, boiled down to this: We’ll do our job, the IRS said, if you give up your rights. Those taking part in the “expedited” process had to agree to limit to 40% the amount of spending and time (calculated by employee and volunteers hours) they spend on political activity. Current 501(c)(4) rules allow political spending up to 49%, and have no “time” component. The clear point of the “deal” was to use the lure of 501(c)(4) approval to significantly reduce the political activity of targeted conservative groups going forward.

Some groups, desperate to get their tax exemption, took the deal. Others refused to be victimized twice. One of them is the Tea Party Patriots, run by Jenny Beth Martin, who told me that she didn’t feel it was right that”every other 501(c)(4) would get to live under a different standard than those of us who had been targeted, and had been waiting for a determination for years.” She let the deadline for using the expedited process pass.

Not long after, the IRS was back hounding the Tea Party Patriots with new requirements. In addition to re-demanding information that Ms. Martin’s group had already supplied, the IRS insisted on new details, like the groups’ fundraising letters from 2012. Cleta Mitchell, an attorney representing targeted groups, tells me one of her clients suffered the same fate. The IRS called to ask if the group would take part in its expedited process. When it turned down the IRS, the government agency hit the group with new questions about its activities. This all happened last summer.

As of last week, Ms. Martin’s group had been waiting three years and three months for its 501(c)(4) letter. (Before Mr. Obama was president, the average time was three weeks.) The targeting has had its intended effect: Ms. Martin notes that supporters of her group have asked to be dissociated, for fear of their own IRS audit.

Now comes the fitting end to this spectacle. Late last week Ms. Martin’s name appeared among those scheduled to testify before the House Oversight Committee this Thursday. On Wednesday, she got a call from the supposedly apolitical IRS. Her group’s application for 501(c)(4) status? Suddenly, miraculously approved.

Politics is also guiding the Justice Department’s alleged investigation of IRS abuses. The Oversight Committee held a separate hearing on Wednesday, at which legal experts laid out the ludicrously partisan nature of Justice’s probe—including the choice of Barbara Bosserman, an Obama donor in the liberal civil-rights division, to handle it.

Ms. Mitchell, the attorney, was due to testify before the Oversight Committee Feb. 6. On Feb. 4, she filed her written testimony, which explained that nine months after this scandal broke, neither she nor her clients had yet to receive a phone call from the FBI or Justice. Three hours after filing, she told me, a Justice representative called, wanting to check on this targeting thing.

And now we have new IRS regulations, which will formalize the crackdown on 501(c)(4) political speech. The IRS has no business here—there is a bipartisan Federal Election Commission to enforce laws about political speech. But the FEC can’t be controlled by the White House, and Democrats have been unable to pass new speech restrictions through Congress.

Democrats are instead fully vested now in using the IRS to shut down criticism by outside groups of ObamaCare, overspending or (ironically) the IRS targeting. Even liberal groups are howling about the White House’s use of the IRS to silence political speech, and the House on Wednesday passed a bill to delay the regulations. The White House’s response? A veto threat.

At a Senate Judiciary Committee markup Thursday morning, Texas’s Ted Cruz offered an amendment to prohibit IRS employees from deliberately targeting individuals or groups based on political views. It was unanimously rejected by every member of the Democratic majority.

The IRS targeting was shocking because Americans expect that agency to be free of politics. In the age of Obama, that era is over. Only when Washington recognizes the IRS for the political tool it has become can it start to fix the problem.

Kimberly A. Strassel is an author and member of the editorial board of The Wall Street Journal.