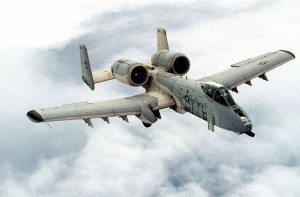 Cutting the functional and economical A-10 would be a mistake

Budget cutters are rumored to have their eyes on the A-10 Thunderbolt, thinking that retiring it may generate much-needed savings.

When the government shutdown was over, President Obama and members of both parties in Congress said they would work together during the coming months toward a sustainable budget. Let’s all hope they do. Government spending must be brought under control, and we need to be smart about the cuts we make.

Congress should focus on cutting things that provide little in return and preserving things that work well and are cost-effective — especially at the Pentagon. The world is simply too dangerous a place to allow the nation’s defense capability to be hollowed out. As George Washington wisely observed, “To be prepared for war is one of the most effectual means of preserving peace.” Cuts that are “penny-wise and dollar foolish” do not help the taxpayer or our war fighters. Retiring the A-10 would be the very definition of “penny-wise and dollar foolish.”

The A-10 Thunderbolt, also known as the “Warthog,” is a highly effective close-air-support jet that protects our ground troops. It has the lowest operating cost of any manned tactical aircraft in the Air Force arsenal.

When U.S. troops are ambushed in the mountains by an al Qaeda cell or a Taliban unit and need close air support, they call on the Warthog by name to come to their aid, even if there are other planes in the area. It’s an aircraft America’s enemies are known to despise because its pinpoint accuracy means their death, even when the enemy and our troops are in proximity. As our national security strategy evolves to reflect a shift to the Pacific, the A-10 would play a critical role in supporting our troops in a region with seven of the world’s 10 largest armies.

Warthogs are designed to fly in low at a relatively slow speed for a jet, and they have a unique 30-millimeter cannon that wreaks havoc on enemy combatants. Its armor and design make it very difficult to shoot down, even at close range, and helps to keep the pilot safe. The Warthog also can carry 16,000 pounds of ordnance to support ground forces. It can fly even with heavy damage, and once it lands, it can be easily repaired in the field, making it ideal for its mission. Simply put, the A-10 is the best plane on the planet for the missions it is called upon to perform.

Looking at it purely from a budgetary perspective, the A-10 Warthog costs a lot less to operate than the other planes. Because of the lower operating cost, retiring the A-10 will actually increase the overall cost per flight-hour across the Air Force.

In a challenging budgeting environment, it can be tough to find funding for “less sexy” planes such as the A-10, but it is vital to our defensive arsenal. In a sense, it’s like the quiet but effective members of a football team. Everyone knows who the quarterback is and expects a top player at that position, but many do not fully appreciate how important the offensive line is. Linemen don’t get the headlines, but if they do their job, the quarterback can do his. If they fail, even the best quarterback will have limited success.

There are rumblings that as the president and Congress begin working on a more manageable budget, the A-10 Warthog will be permanently grounded. That would leave the United States without the means to support ground troops effectively. At the same time, Pentagon costs would escalate because other planes do not perform the close air support mission nearly as well, and they cost exponentially more to operate.

Americans hope that Congress and the White House will engage in smart budgeting and allocate our military resources that are both effective and economical. If they do, the A-10 will continue to serve our ground troops as it has for decades.

George Landrith is president of Frontiers of Freedom. His article was published in The Washington Times.