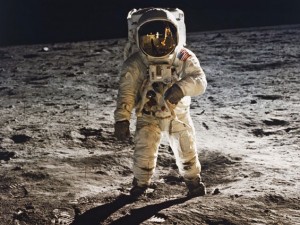 NASA has been in the news for all the wrong reasons the past twelve months. First, the White House reportedly directed NASA to concentrate on Earth-based projects like researching climate change rather than returning to the moon, reestablishing U.S. space dominance, or exploring Mars. Second, Obama’s NASA administrator Charles Bolden revealed that one of President Obama’s primary missions for NASA was to “reach out to the Muslim world” to help Islamic nations “feel good” about their contributions and accomplishments in the scientific arena. In other words, NASA will become an international feel-good organization.

Some might argue that in financially tight times, it is necessary to cut spending and thus kill planned missions to the moon and to Mars. But NASA’s budget hasn’t been cut – only its mission has but gutted and its vision clouded. That is a HUGE mistake.

NASA should be working to keep the United States as the world leader in space exploration. There are billions of dollars spent on climate research and NASA doesn’t need to duplicate those efforts. And the idea of making NASA an international counseling organization to help Islamic nations feel better about their lack of high technology development is utterly silly.

Since the last Apollo mission in the 1970s, our space exploration program has focused on low Earth orbit. The United States needs to get back into business of looking further into outer space. We need to develop a heavy lift launch capability. But NASA cannot do this job, if the president’s foresight is so weak and unimaginative. President John F. Kennedy focused the nation on a bold vision that captured the American imagination. Obama would do well to follow his example.

A failure of vision has real costs. Much of the advancement and growth in the economy the past three decades have their roots in the space program. And not Tang or Zip Lock bags. But transistors, circuit boards, computerization and miniaturization technologies were all advanced at unprecedented rates by the space program. Ask yourself what would have happened had Queen Isabella turned down Christopher Columbus and refused to fund exploration to find alternative trade routes to the East? What would have happened if Sir Francis Drake or Ferdinand Magellan had not been sent out to explore? What if President Thomas Jefferson had decided to save money and not send Lewis and Clark out to explore and chart North America?

It is time for NASA to again be in the big vision business. We need to head back to the moon so that we can hone our skills and technology for the more demanding trip to Mars and other yet unknown challenges. That means we need to develop a heavy lift rocket and a space vehicle that can safely carry astronauts into deep space and bring them home again. Each year we wait, is time lost towards the goal. Even worse, as we delay and waste time, our space and high tech industry shrinks and we slowly become less capable of accomplishing the goal. If the president lacks the vision to direct NASA to perform its natural function, Congress should intervene and push the point. We cannot allow the president to neuter our space program. Other nations with less myopic leadership will quickly fill the void, leaving the United States to play catch up for decades to come.

Americans are by their very nature explorers. We were founded by explorers. In our nation’s early history, we explored the western frontiers. More recently, we lead the way in space exploration. As a boy, I grew up admiring men like John Glenn, Neil Armstrong, Buzz Aldren, and Jim Lovell. I watched with amazement as men walked on the moon and planted the American flag there. I watched the Space Shuttle fly off into the sky and become the backbone of a vibrant space station program. There is value in being inspired by a great vision and amazing accomplishments. Our children ought to have the chance to reach for the stars. We ought not dream small dreams. Small dreams do not inspire or motivate. We ought not limit our children’s hope or vision.