Freedom Centers Constitutional and Political Freedom Another Secret Service Scandal — This One’s No ... 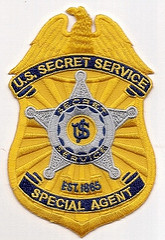 Let’s not shy away from what the Secret Service actually was up to in the matter of its illegal spying on Representative Jason Chaffetz: conspiracy to commit blackmail against a member of Congress.

Representative Chaffetz has been investigating the scandal-plagued protective agency — the habitual drunkenness and whoring of its agents, among other things — when Secret Service personnel improperly accessed his protected records in a hunt for dirt. The aim of this was made clear by assistant director Ed Lowery, who wrote to assistant director Faron Paramore: “Some information that he might find embarrassing needs to get out.”

Critics are saying that the agency’s brass — at least 18 of them were culpably aware of the plan, and 45 employees illegally viewed the congressman’s information — have violated the Privacy Act. They certainly have, but that is the least of it. They have illegally accessed protected federal records, which is fraud under federal law and carries a ten-year prison sentence. Releasing embarrassing information about the congressman (assuming there was any), with the inevitable implicit threat of releasing more unless he backed off in his investigation of the Secret Service, rises to the level of prosecutable blackmail under federal law. Throw in the interstate-communication and obstruction charges and there’s an excellent case to be made for locking away Ed Lowery and his confederates for a long time. Frankly, it’s a pity more robust punishment is not an option. A society with a bit of moral vigor would have them flogged.

Public corruption is extraordinarily dangerous to a free society, and corruption by law-enforcement agencies is the deadliest of all. This isn’t a case of questionable police behavior with conflicting witnesses; the inspector general’s report is unequivocal on the facts of the case. Yes, of course, they should have their day in court — the problem with the Secret Service is that its agents never end up on trial when they have plainly broken the law, even when there are witnesses, and even when those witnesses are police officers. Men with guns and the power to put citizens under arrest must be held to the very highest standards — and punished with the utmost severity when they transgress.

But adhering to the highest standards isn’t on the agenda of this basket case of an agency. Case in point: David Neiland, the Secret Service investigator entrusted with investigating the agency’s prostitution scandals, resigned — was permitted to resign rather than be fired — after his own prostitution scandal. A prostitute identified him and confirmed that he had paid her for sex, but he was not charged with a crime. Why? Prior to the prostitution scandal in Cartagena, the agency maintained a blind-eye policy toward the crimes of its agents. Why? Secret Service agents drove drunk on the White House grounds — through emergency barriers erected as part of an emergency bomb investigation — and they weren’t even given sobriety tests; in fact, they were permitted to drive home in government cars, despite their being obviously “hammered” as one police officer put it. Why?

Perhaps now that they’ve moved on from buying Colombian women to targeting congressmen, somebody in Washington can get around to treating these criminals like the criminals they are.

But that should not be the end of the housekeeping. The Secret Service is, undeniably, a rogue police agency infected with a culture of lawlessness. Director Joseph Clancy has had an opportunity to address this, and he has failed. He should be relieved of his duties, and so should Homeland Security Secretary Jeh Johnson if he cannot get this heavily armed goon squad under control.

And perhaps it is time to start thinking about transferring the Secret Service’s law-enforcement functions to the FBI and its protective functions to a new agency, one less prone to behaving like a crime syndicate.