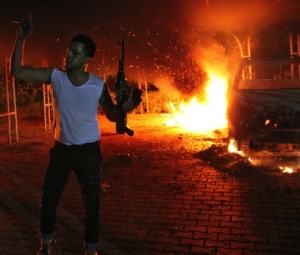 Why won’t the Libya story go away? Why can’t the memory of U.S. Ambassador Chris Stevens and his staff be consigned to the same sad-and-sealed file of Americans killed abroad in dangerous line of duty? How has an episode that seemed at first to have been mishandled by the Romney camp become an emblem of a feckless and deluded foreign policy?

The story-switching and stonewalling haven’t helped. But let’s start a little earlier.

The hour is 5 p.m., Sept. 11, Washington time, and the scene is an Oval Office meeting among President Obama, the secretary of defense, the national security adviser and the chairman of the Joint Chiefs of Staff. The U.S. diplomatic mission in Benghazi has been under assault for roughly 90 minutes. Some 30 U.S. citizens are at mortal risk. The whereabouts of Ambassador Stevens are unknown.

What is uppermost on the minds of the president and his advisers? The safety of Americans, no doubt. So what are they prepared to do about it? Here is The Wall Street Journal’s account of the meeting:

“There was no serious consideration at that hour of intervention with military force, officials said. Doing so without Libya’s permission could represent a violation of sovereignty and inflame the situation, they said. Instead, the State Department reached out to the Libyan government to get reinforcements to the scene.”

So it did. Yet the attack was far from over. After leaving the principal U.S. compound, the Americans retreated to a second, supposedly secret facility, which soon came under deadly mortar fire. Time to call in the troops?

“Some officials said the U.S. could also have sent aircraft to the scene as a ‘show of force’ to scare off the attackers,” the Journal reported, noting that there’s a U.S. air base just 450 miles away in Sicily. “State Department officials dismissed the suggestions as unrealistic. ‘They would not have gotten there in two hours, four hours or six hours.'”

The U.S. security detail only left Benghazi at 8 a.m. on Sept. 12, more than 10 hours after the attacks began. A commercial jet liner can fly from D.C. to Benghazi in about the same time.

So how did the administration do on that count? “That the local security did so well back in June probably gave us a false sense of security,” an unnamed American official who has served in Libya told the New York Times last week.

The logic here is akin to supposing that because the 1993 attack on the World Trade Center failed to bring down the towers, nobody need have been concerned thereafter. But let’s still make allowances for the kind of bureaucratic ineptitude that knows neither administration nor political party.

The more serious question is why the administration alighted on the idea that the attack wasn’t a terrorist act at all. Also, what did the White House think it had to gain by adopting the jihadist narrative that a supposedly inflammatory video clip was at the root of the trouble?

Nobody can say. All the administration will acknowledge is that it has “revised [its] initial assessment to reflect new information that it was a deliberate and organized terrorist attack.”

That’s from James Clapper, the director of national intelligence. It suggests that our intelligence agencies are either much dumber than previously supposed (always a strong possibility) or much more politicized (equally plausible).

No doubt the administration would now like to shift blame to Mr. Clapper. But what happened in Benghazi was not a failure of intelligence. It was a failure of policy, stemming from a flawed worldview and the political needs of an election season.

The U.S. ignores warnings of a parlous security situation in Benghazi. Nothing happens because nobody is really paying attention, especially in an election year, and because Libya is supposed to be a foreign-policy success. When something does happen, the administration’s concerns for the safety of Americans are subordinated to considerations of Libyan “sovereignty” and the need for “permission.” After the attack the administration blames a video, perhaps because it would be politically inconvenient to note that al Qaeda is far from defeated, and that we are no more popular under Mr. Obama than we were under George W. Bush. Denouncing the video also appeals to the administration’s reflexive habits of blaming America first. Once that story falls apart, it’s time to blame the intel munchkins and move on.

It was five in the afternoon when Mr. Obama took his 3 a.m. call. He still flubbed it.