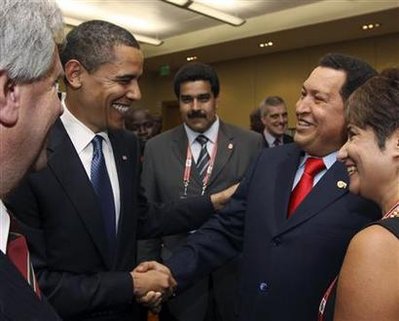 Venezuela’s dictator Hugo Chavez gave his enthusiastic endorsement to President Barack Obama and offered that he was confident that Obama felt similarly about him. Both Chavez and Obama are facing tough re-election fights.

“If I was from the United States, I’d vote for Obama,” the socialist Chavez said.

Since rising to power and amazing near dictatorial powers, Chavez has styled himself as the head of a global “anti-imperialist” movement which he says he was inspired to do by his friend and ideological mentor Fidel Castro, the longstanding dictator of Cuba.

Putin has also signaled that he is pulling for Obama to win reelection — presumably because Obama has promised Russia greater “flexibility” if he is successful in his reelection bid. A weak America is good for Putin’s agenda of regaining some of the past glory of the former Soviet Union.

Iran’s madman President Mahmoud Ahmadinejad hasn’t yet made an endorsement, but given that Obama is pushing back against Israel’s attempts to stop Iran from acquiring nuclear weapons and has called Israel, there can be little doubt that Iran would prefer Obama’s reelection. A weak America is good for Iran’s homicidal agenda.

The Muslim Brotherhood also has not made any formal endorsements, but again, logic would suggest that to the extent they can tolerate any American, Obama is their candidate of choice. He helped the rise to power in Egypt. Obama is promising the Muslim Brotherhood more funding regardless their stance on Middle East peace or their refusal to protect our embassy or their insane demands that Americans silence anyone who dares speak disrespectfully of Islam or face the treat of more mob violence and terrorism.

One thing is clear, the enemies of freedom and peace seem to be lining up to support Barack Obama. What it means is anyone’s guess, but it is interesting and possibly revealing.