Freedom Centers Economic Freedom Big Bird can make it rain on his own ...

Big Bird can make it rain on his own 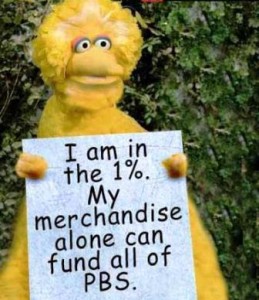 Big Bird is a billionaire. A Warren Buffett, Eric Schmidt, Steve Jobs billionaire, which is pretty impressive considering that he is not a real person but rather a giant, yellow bird (which is a kind of terrifying concept if you actually think about it for a second.)

Advocates for continued federal funding of the Public Broadcasting Service got their undies in a twist Wednesday night when GOP presidential candidate Mitt Romney said that he would cut funding to the beloved TV station to reduce the national deficit.

“I like PBS. I love Big Bird … But I’m not going to keep on spending money on things to borrow money from China to pay for it,” Romney said during the debate. So even as much as Romney “loves” the feathered “6-year-old,” he knows that sometimes you just have to take it out back and shoot it Old Yeller style.

Almost instantly, defenders of PBS and “Sesame Street” took to Twitter to suggest that Big Bird was going to lose his job, and the big yellow puppet became the fourth highest Google search term that night.

“Sesame Street” is a multimillion dollar industry, even without any taxpayer funding. Every year around Christmastime we hear about Wal-Mart shoppers literally fighting to the death for the last “Tickle Me Elmo” — or whatever bug-eyed, furry red successor it is — on the shelf. The marketing rights for “Sesame Street” and “Barney” total $1.3 billion, according to a 2005report by former Florida Rep. Ginny Brown-Waite, and “Sesame Street” merchandise is in every toy store, Wal-Mart and Target across the country.

The Huffington Post wrote that “Sesame Workshop, the nonprofit that produces the show ‘Sesame Street,’ made $46.9 million in revenue from licensing Big Bird, Elmo, the Cookie Monster and other characters in 2011, according to financial statements. This money helped pay the salaries of 1,320 employees.”

All those millions of dollars from licensing revenue couldn’t possibly keep the program afloat — could it? HuffPo went on to suggest that killing off Big Bird would kill “thousands” of jobs — down to the very fine people at American Plume & Fancy Feather Co. that make the costume’s feathers for $12,000 to $15,000 per year to keep Big Bird from moulting.

But South Carolina Sen. Jim DeMint, who has advocated against federal funding for PBS and NPR , told The Daily Caller in a statement that ”Sesame Street” will make it just fine without federal funding.

“We shouldn’t borrow from China to subsidize profitable shows, especially when Americans already have so many educational and entertainment programming choices on TV, radio and the internet,” DeMint said. “‘Sesame Street’ is a multi-million dollar enterprise and Cookie Monster will eat just fine without taxpayer subsidies. We need to stop unnecessary and wasteful federal spending so we can lower taxes and create jobs in the private sector.”

Taylor Bigler is the Entertainment Editor at the Daily Caller.