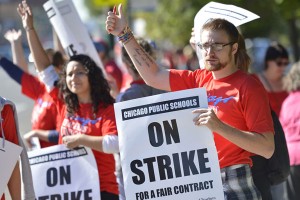 The smartest parents in Chicago right now are those whose kids attend charter schools, private schools, or parochial schools. Those institutions don’t employ Chicago’s unionized public-school teachers, who went out on strike this morning for the first time in 25 years.

The coverage of the strike has obscured some basic facts. The money has continued to pour into Chicago’s failing public schools in recent years. Chicago teachers have the highest average salary of any city at $76,000 a year before benefits. The average family in the city only earns $47,000 a year. Yet the teachers rejected a 16 percent salary increase over four years at a time when most families are not getting any raises or are looking for work.

The city is being bled dry by the exorbitant benefits packages negotiated by previous elected officials. Teachers pay only 3 percent of their health-care costs and out of every new dollar set aside for public education in Illinois in the last five years, a full 71 cents has gone to teacher retirement costs.

But beyond the dollars, the fact is that Chicago schools need a fundamental shakeup — which of course the union is resisting. It is calling for changes in the teacher-evaluation system it just negotiated by making student performance less important.
Small wonder. Just 15 percent of fourth graders are proficient in reading and only 56 percent of students who enter their freshman year of high school wind up graduating.

The showdown in Chicago will be a test of just how much clout the public-employee unions wield at a time when the budget pressures they’ve created threaten to break the budgets of America’s major cities.

This article was originally published at National Review Online on Sept. 10, 2012.