Freedom Centers Constitutional and Political Freedom Obama: No Time for Israel, but Time for Letterman ...

Obama: No Time for Israel, but Time for Letterman 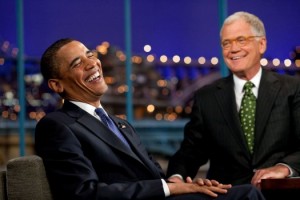 With the shocking assassination of the U.S. Ambassador to Libya and 3 other diplomats and the violent attack on the U.S. Embassy in Egypt, the White House  has time to fly to Nevada for fundraisers and campaign activities, but not time to meet with our best ally in the Middle East, Israel.

The White House declined Israeli Prime Minister Benjamin Netanyahu’s request to meet with U.S. President Barack Obama during a UN conference in New York at the end of September.

To make matters worse, the White House announced on the same day that it said it did not have time to meet with Prime Minister Netanyahu, that it was making time to appear on a late night comedy show with David Letterman.

This will be Obama’s second interview with Letterman since the late night comic made a very crude, demeaning joke about the statutory rape of the 14-year old daughter of Sarah Palin.

This brings into question the sincerity of Obama’s much ballyhooed calls for greater civility. To further bring into question Obama’s sincerity about civility, is his super-pac’s acceptance of $1 million from Bill Maher who also regularly calls conservative women vile and crude names as a source for his humor and tells crude rapist jokes as well. At some point, if Obama wants Americans to take him seriously as a promoter of civility, he should stop keeping company with the most vile of hate mongers in America.