The Supreme Court justice asked a question for the first time in 10 years, revealing a different dynamic since the passing of Antonin Scalia. 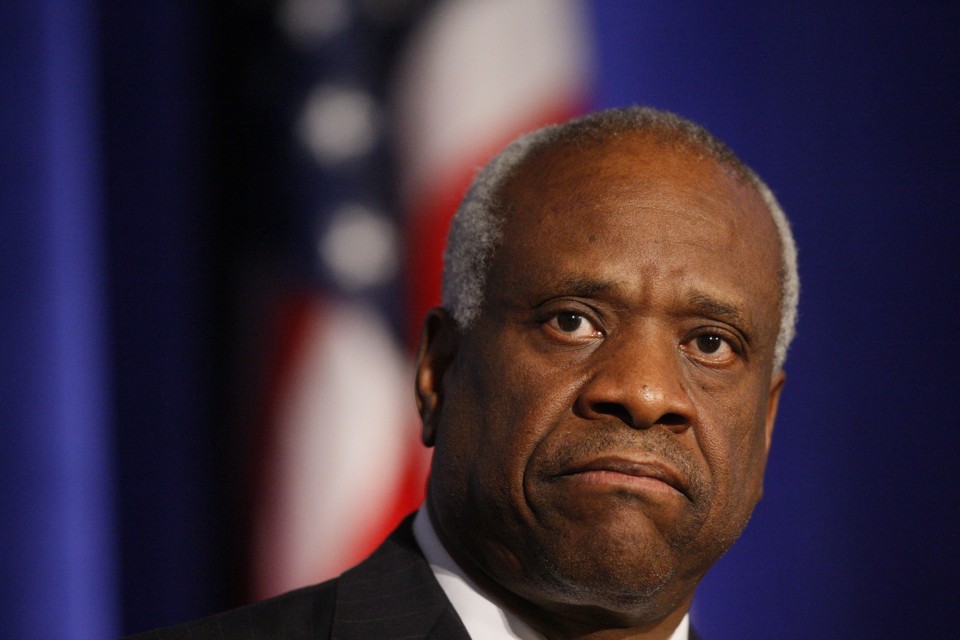 At heart, law professors are simply overpaid nerds, the kind who take notes in three colors of ink and use two sizes of Post-its to tab out a casebook. We tend to have the ability to find something interesting in proceedings that would bore a normal human being into a state of coma.

Thus it was that at 10:45 a.m. Monday, I was in a sparsely populated Supreme Court press gallery watching Assistant U.S. Solicitor General Ilana Eisenstein provide a rapid wrap-up to a desultory argument over the meaning of “use” as applied a domestic-violence statute forbidding a defendant from “intentionally, knowingly or recklessly” causing “bodily injury or offensive physical contact” with a domestic partner.

Like a drowsy One-L Criminal Law class, the discussion had droned idly from Black’s Law Dictionary to Blackstone’s Commentaries. The topic, insofar as one could be found, seemed to be whether under a given state’s statute, “offensive physical contact” could be merely “reckless,” or had to be “intentional or knowing.” And if a defendant has been previously convicted of physical contact that was offensive but “merely” reckless, could that conviction be the basis for a later conviction under federal law that forbids anyone “convicted…of a misdemeanor crime of domestic violence” from “possess[ing]” guns or ammunition?

Virginia Villa, an assistant federal public defender, had endeavored without making much progress to convince the court that Congress, which wrote the gun-possession statute, could not have intended the statute to sweep so broadly. So confident was Eisenstein, her opponent, that she was preparing to close up shop early.

“If there are no further questions,” she began.

At this point the entire Supreme Court chamber sailed into the unknown.

Though the vigilant marshals keep a tight lid on noise, it’s safe to say that not since Clarence Darrow for the defense called prosecutor William Jennings Bryan himself to the stand has an American courtroom been so startled. Thomas has not asked a question in court since February 22, 2006. His silence has been the subject of speculation, ridicule, and indignant denunciation. (Jeffrey Toobin of The New Yorker two years ago called it “disgraceful.”) Others, including me, had thought it instead a sad loss for the Court. But it’s safe to say that nobody expected Voisine v. United States to be the case that would break the streak.

Yet here Thomas was, and his question was far from random. That’s because under the surface of the case lies the issue of guns. When the defendants first petitioned the Court for review, they had posed as a question for the Court whether the federal gun-possession statutes are “unconstitutional under the Second, Fifth, and Sixth Amendments and the Ex Post Facto Clause of the United States Constitution.”

When the Court granted review last October, however, its terse order had explicitly rejected that question, limiting argument to the issue of whether a “reckless” act of domestic violence could qualify as a trigger for the statute.

The courtroom was about to learn that Clarence Thomas wasn’t so sure about that limitation. He now asked Eisenstein, “Can you give me another area where a misdemeanor suspends a constitutional right?”

Eisenstein, as gobsmacked as anyone else, made somewhat incoherent noises until Thomas elaborated. “You’re saying that recklessness is sufficient to trigger a violation— misdemeanor violation of domestic conduct that results in a lifetime ban on possession of a gun, which, at least as of now, is still a constitutional right. . . . Can you think of another constitutional right that can be suspended based upon a misdemeanor violation of a state law?”

Eisenstein suggested that some criminal sentences carry with them limitations or suspensions of the rights of free speech. Thomas pressed her. The gun-possession ban, he pointed out, is, if not lifelong, at least indefinite. And the ban takes effect whether or not the defendant actually used a gun in the act of domestic violence.

“Well, Your Honor, I think the studies that Congress relied upon in formulating the misdemeanor crime of domestic-violence ban…were directly about the use of a gun because what they showed is that individuals who have previously been ­­battered their spouses, pose up to a six­fold greater risk of killing, by a gun, their family member.”

Suppose a publisher had recklessly printed “indecent display” of children and was convicted of a misdemeanor, Thomas asked. “Could you suspend that publisher’s right to ever publish again?”

Probably not, Eisenstein responded, though perhaps a court could limit the “time and means.”

Thomas responded, “So how is that different from suspending your Second Amendment right?”

Eisenstein continued that the “lifelong” issue was in fact in the hands of the states, which can enact “expungement” statutes that void misdemeanor convictions after a period of good behavior. Justice Anthony Kennedy pointed out that a federal statute requires sex offenders to register anew each time they move to a new jurisdiction.

Then Justice Stephen Breyer pointed out that the question Thomas was posing—“what constitutes a reasonable regulation of guns” under the Court’s recent decisions that the Second Amendment includes a personal right to possession of some firearms?—was in fact simply not before the Court. “We aren’t facing the constitutional question,” Breyer said. “We don’t have to decide that here.” Eisenstein agreed and took the opportunity to escape.

The Clarence Thomas moment had passed. Will there be more?

There’s nothing new about Thomas’s claim that the Second Amendment right to bear arms has precisely the same components as the First Amendment right of free speech. Almost no one else thinks that, but he has pursued the idea in opinions dissenting from denials of review in Second Amendment cases. His remark that “at least as of now” gun possession is “still a constitutional right” injects partisan politics even further into the current furor surrounding the Court.
And, of course, his sudden loquacity comes barely two weeks after his comrade in arms, Antonin Scalia, died.

Scalia’s absence has been notable during argument. One of Scalia’s roles on the bench was to play ideological bad-cop—when a lawyer transgressed against conservative orthodoxy, Scalia would often step in with an aggressive, even intimidating, question. In that role, he played a significant role in moving the valence of argument to the right. And like Thomas, Scalia took on the Second Amendment as his special darling.

I often meet people who believe that, in some way, Thomas was a kind of satellite of Scalia’s, dependent on him for guidance and ideas. I found, and still find, that idea jejune. Thomas, whatever his other defects, is not a man short of opinions. But he has been able to swim in Scalia’s slipstream until now, secure in the assumption that Scalia was on the job.

Perhaps he has decided to emerge from silence and play that role. (Certainly refocusing argument from the intent of Congress to the “right” of domestic abusers to own guns is a push rightward.) Or perhaps he will lapse back into silence until another “right to bear arms” issue comes before the Court. Or perhaps he won’t ask a question again for another 10 years.

But Monday’s surprise is powerful evidence that the Court today is a different place than it was on February 12. (If you doubt me, consider that no justice on the current court has ever sat on it without Scalia.) Former Justice John Paul Stevens, in his memoir Five Chiefs, argues that, each time a new justice joins the Court, the bench is remade—meaning, for example, that the past six years have been not the Roberts but the “Kagan Court.” If that is true, then a missing Justice may create a new judicial constellation as surely as a new one. Perhaps Clarence Thomas’s star will shine brighter as a result.