Freedom Centers Constitutional and Political Freedom Democrats: We Shall Overcome The Constitution ...

Democrats: We Shall Overcome The Constitution

An unprecedented act of pretend bravery 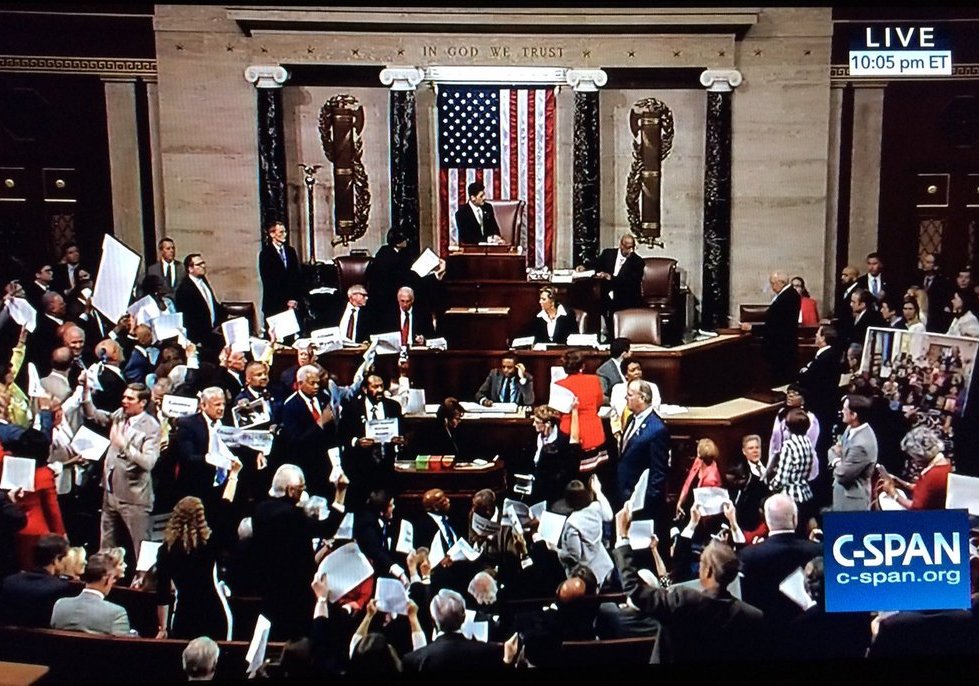 Nothing stirs the passions of Democrats these days quite like the prospect of gutting the Constitution. In an unprecedented act of pretend political bravery, House members held a catered sit-in, demanding Republicans allow a vote to strip away protections of Second, Fifth, and Sixth Amendments of the Constitution. It was quite the scene.

There were the selfie-happy Democrats singing “We Will Overcome” while demanding passage of a bill that those right-wing nutjobs over at the ACLU have “strongly” argued would undermine civil liberties. As of this writing, no participant has been beaten down by the cops or thrown into a dank cell — although, for those who’d forgotten their chargers, iPhone batteries were probably getting perilously low on juice.

But the message was clear. If we recklessly cling to the presumption of innocence, the terrorists have already won. If we fail to let bureaucrats create extrajudicial secret government lists that deny Americans their right to due process, we are, in essence, selling ISIS weapons of mass destruction.

Civil rights-era heroes like John Lewis, who lent his considerable legacy to this vacuous grandstanding, was once himself on the terror watch list. He didn’t know how he got on it. He didn’t know how to get off of it. Yet today he believes this Kafkaesque system is a sound way to deny his fellow citizens their rights.

This is the Democratic Party of 2016. Engaging in emotional blackmail and demagoguery, waving pictures of the victims of Islamic terrorism to push an unrelated bill that would not have saved a single one of those lives and will never pass. All while lying about guns. Lying about the laws that govern guns and refusing to vote for, or even discuss, a compromise measure Republicans forwarded in the Senate. It’s been far more important to gin up anger and moral outrage for political gain.

Don’t get me wrong. I hope Democrats dig deep and find the steely resolve to disrupt all of DC’s business until they are given a vote — for weeks or months, if necessary. Shut it all down. It won’t be easy. I mean, it’s going to take some serious courage to support a measure with support polling in the high 80s. But anything less is a moral capitulation to the dark lords at the NRA.

Although there are principled progressives who oppose these efforts, it is worth mentioning that many of the same liberals who claim the filibuster — conducted within the norms of the Senate — is unhinged obstructionism themselves celebrate Democrats. When a shutdown looms because of the GOP, we are bombarded with stories about a broken political system. This event, rest assured, will be treated quite differently. As inane as it is, it will be framed as an “historic” moment that might/could/did change everything in the fight against gun violence. It’s already started.

Well, it’s definitely a histrionic moment. When House Speaker Paul Ryan tried to gavel the body into session the first time, he was shouted down with calls of “Shame!” and “No bill, no break!” (remember that national discussion on civility?) to rising applause from a bunch of people who are perpetually searching for their ’60s moment.

Rep. Sander Levin (D-MI): Think it may well be happening now. Think this may turn out to be Selma-like moment relating to gun violence.

Ah, the “Selma envy” moment. The entire day was drenched in that kind of sanctimony. In an interview with MSNBC, Seth Moulton asked: “Were the civil rights organizers just breaking rules and getting publicity?” No. Now, Moulton says a lot of purposefully misleading things about guns in an attempt to scare Americans who don’t know any better. It takes a special kind of duplicity, though, to anoint oneself defender of civil liberties while pushing an authoritarian measure that would deny millions of Americans some of their most basic constitutional rights.