Dershowitz: ‘The Fog of Fascism Is Descending Quickly Over Many American Universities’ 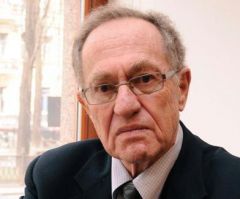 Retired Harvard University Law Professor Alan Dershowitz strongly criticized the recent protests at the University of Missouri and Yale University, stating that “these students are book burners,” and “the fog of fascism is descending quickly over many American universities.”

“We are seeing a curtain of McCarthyism descend over many college campuses,” said Dershowitz. “I don’t want to make analogies to the 1930s, but we have to remember it was the college students who first started burning books during the Nazi regime. And these students are book burners. They don’t want to hear diverse views on college campuses.”

“By expressing my opinion,” he continued, “I am ‘harassing students.’ This has become a very serious problem not only in American universities, but in universities around the world as well. And it is influencing and having a terrible impact on the education of students.”

“It is the worst kind of hypocrisy,” said Dershowitz. “They want complete freedom over their sex lives, over their personal lives, over the use of drugs, but they want mommy and daddy, dean, and president to please give them a safe place, to protect them from ideas that maybe are insensitive. Maybe we’ll make them think, but it’s a double standard.”

“Look at what’s happening at Hunter University, City University of New York, students from Students for Justice in Palestine have issued a petition saying Zionist administrators are causing high tuition in the school,” said the former Harvard law professor.

“Zionist administrators, you know what they mean by Zionist?” he said. “They mean Jews. Blatant anti-Semitism, nobody says a word.”

He continued, “When I spoke at Johns Hopkins University, some of the protesting students, the same students who were talking about ‘safe places,’ painted a Hitler mustache on my posters. No concern about that, it’s an absolute double standard.

“It is free speech for me, but not for thee. And universities should not tolerate this kind of hypocrisy, double standard, and college administrators have to start treating students as adults and talking back to them.

“If you’re going to be a college administrator, or a professor, if you have tenure, you have to speak back to the students, you have to call these things what they are: double standards, hypocrisy, bigotry, McCarthyism, and the fog of fascism is descending quickly over many American universities.”