EADS/Airbus Corruption: A bad gamble for the tanker 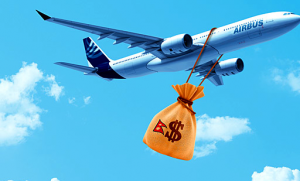 The European Aeronautic Defense and Space Company (EADS) and its subsidiary Airbus recently threatened to withdraw from the Pentagon competition to design and build the next-generation fleet of refueling-tanker aircraft. The question is, should anyone care? When one examines Airbus’s shady corporate dealings over the past couple of decades, their exiting the competition may actually be a blessing in disguise.

In the earlier phases of the tanker competition, Congressman Todd Tiahrt of Kansas said that Airbus sought and was given an exemption to the Foreign Corrupt Practices Act, a law that prohibits companies doing business in the U.S. from engaging in corruption such as bribery and kickbacks. Why would a company that intends to follow the law and deal honestly seek an exception from a law prohibiting corruption and bribes? And even more troubling, why would the Pentagon grant such a request?

EADS and its subsidiaries have been the subject of bribery scandals in Canada, India, Belgium, Kuwait, Switzerland and Austria. In Austria, an EADS/Airbus lobbyist was accused of paying 87,000 Euros ($117,00) to the wife of an Austrian official in charge of the almost $3 billion contract aircraft contract.

Airbus is also center stage in another corruption scandal in which it is alleged that a specially equipped Airbus A-340 was gifted to an influential Saudi prince to sweeten the deal on a massive arms deal with Saudi Arabia. Additionally, $2 billion were allegedly deposited into Saudi accounts to help close the deal.

But the culture of corruption doesn’t stop with bribery. More than 1,200 employees allegedly engaged in an insider-trading scheme, dumping shares of Airbus stock before bad news about the A380 and A350 leaked out to the general public. Such a large-scale case of widespread insider trading, combined with a consistent pattern of bribery reveals a troubling corporate culture of corruption  at Airbus.

And, back in 2004, EADs was involved in an ugly political scandal in France in which it was not only accused of paying kickbacks and bribes, but also trying to frame certain presidential candidates in an attempt to influence the election outcome. We’ve never seen a scandal of this magnitude or implication in the United States. But it shows a brazen disregard for law and stunning willingness to play illegal politics.

Technology transfer is also a problem with EADS, which has also been trying to sell military helicopters to Iran – a nation that is recklessly pursuing nuclear weapons and stands at odds to the rest of the civilized world. When caught red-handed, Airbus didn’t even offer an apology. It seems clear that Airbus has no allegiance or loyalty to the United States of America, and will be only too happy to sell sensitive technology developed at our expense to the highest bidder.

EADS/Airbus simply has too many skeletons in the closet to make them trustworthy partners in a sensitive military contract that will be in place for up to forty years. The Airbus tanker is second rate. It did not meet all the requirements established by the war fighters. It is less survivable for the crew in the event of attack. It is less capable. It cost more to buy and to maintain. And Airbus has a track record of corruption. But it all makes sense. If you were committed to selling second rate products at inflated prices, wouldn’t bribery and corruption have to part of your business plan?

It is time to say no to Airbus and all its baggage. It is simply too risky.