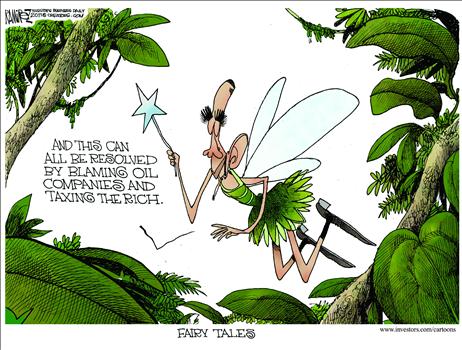 President Barack Obama has claimed his administration will “restore science to its rightful place,” but his policies are increasingly faith-based. Obama’s insistence on mandating alternative energy use, regardless of the real-world consequences, is just the latest example.

The president last week signed a memorandum directing the federal government to nearly triple its use of renewable energy sources for electricity by 2020. Under that directive, the government will be expected to get 20 percent of electricity from renewable sources, up from the previous goal of 7.5 percent.

We have nothing against alternative energy — wind, solar, whatever — but those energy sources haven’t overtaken fossil fuels for one simple reason: Alternative energy production costs more and is less reliable. Thus, Obama’s memo is ordering the federal government to spend more for less.

That’s not surprising given Obama’s fiscal track record. Even so, this action shouldn’t go unnoticed. At a time of unsustainably high deficit spending, Obama is making things worse by asking that taxpayers also get reduced bang for their borrowed buck.

This is especially worrisome in the area of national defense, where the administration has already set a goal for the Defense Department to have 25 percent of its energy needs supplied by renewable energy by 2025. Under the sequester plan hatched within the Obama administration, defense faces 50 percent of all spending cuts. Obama apparently hoped this would force Republicans to cave to his demands for higher taxes and increased spending; it didn’t.

If alternative energy is the most cost-effective source for a military installation, then by all means use it. Otherwise, the military should use the most affordable and reliable energy sources — period. Military spending should augment our nation’s might and deter aggression by U.S. enemies, but Obama’s order prioritizes windmill installation to the detriment of military preparedness.

As for increased energy independence, that’s already occurring thanks to the fracking revolution — and Obama had virtually nothing to do with it. In fact, Obama is often an impediment to energy independence. Approval of the Keystone XL pipeline would do far more to promote North American energy independence than any array of solar panels on a federal building’s roof, but Obama has delayed that process. When it comes to taking steps that truly improve energy independence, Obama remains blithely unconcerned.

It’s true that his order could artificially increase demand for alternative energy, which would result in some jobs being created in those fields. But the higher costs borne by taxpayers as a result will destroy work opportunities elsewhere. The economic effect of Obama’s order could easily be a net loss of jobs, not an increase.

The president seems to believe that by uttering the correct incantation through an executive order, an economic system powered by alternative energy will suddenly appear, replacing fossil fuels. That isn’t a sign of employing science in policymaking. It’s evidence of belief in magic.

This article was written by The Oklahoman editorial board.