Study: Earth was warmer in Roman and Medieval times 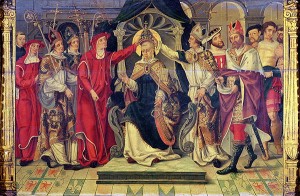 If you think the Earth is hot now, try wearing plate armor in the Middle Ages.

A Swedish study found that the planet was warmer in ancient Roman times and the Middle Ages than today, challenging the mainstream idea that man-made greenhouse gas emissions are the main drivers of global warming.

The study, by scientist Leif Kullman, analyzed 455 “radiocarbon-dated mega-fossils” in theScandes mountains and found that tree lines for different species of trees were higher during the

Roman and Medieval times than they are today. Not only that, but the temperatures were higher as well.

“Historical tree line positions are viewed in relation to early 21st century equivalents, and indicate that tree line elevations attained during the past century and in association with modern climate warming are highly unusual, but not unique, phenomena from the perspective of the past 4,800 years,” Kullman found. “Prior to that, the pine tree line (and summer temperatures) was consistently higher than present, as it was also during the Roman and Medieval periods.”

According to Kullman, the temperature spikes were during the Roman and Medieval warming periods “were succeeded by a distinct tree line/temperature dip, broadly corresponding to the Little Ice Age.”

For many years now, there was an alleged scientific consensus that the Earth was warming due to humans releasing greenhouse gases into the air — primarily through burning fossil fuels. However, temperatures stopped rising after 1998, leaving scientists scrambling to find an explanation to the hiatus in warming.

Increasingly, scientists are looking away from human causes and looking at solar activity and natural climate variability for explanations of why the planet warms and cools.

“All other things being equal, adding more greenhouse gases to the atmosphere will have a warming effect on the planet,” Judith Curry, a climatologist at the Georgia Institute of Technology, told the Los Angeles Times. “However, all things are never equal, and what we are seeing is natural climate variability dominating over human impact.”

The Kullman study points to mounting evidence that climate is largely out of human control, as humans were not burning large amounts fossil fuels during Roman and Medieval times.

“By looking back at certain isotopes in ice cores, [Professor Mike Lockwood of Reading University] has been able to determine how active the sun has been over thousands of years,” the BBC reports. “Following analysis of the data, Professor Lockwood believes solar activity is now falling more rapidly than at any time in the last 10,000 years.”

Others have looked to natural climate systems for explanations for answers to the 15-year pause in global warming.

A study by Dr. Roy Spencer from the University of Alabama, Huntsville found that about half the warming that occurred since the 1970s can be attributed to El Niño weather events, which had a warming effect on the planet.

The Pacific Ocean’s natural warming and cooling cycles last about 30 years, with La Niña cooling being dominant from the 1950s to the 1970s and El Niño warming events dominating late 1970s to the late 1990s. Spencer suggests that the world may be in a La Niña cooling period.

Michael Bastasch is a journalist for the Daily Caller.