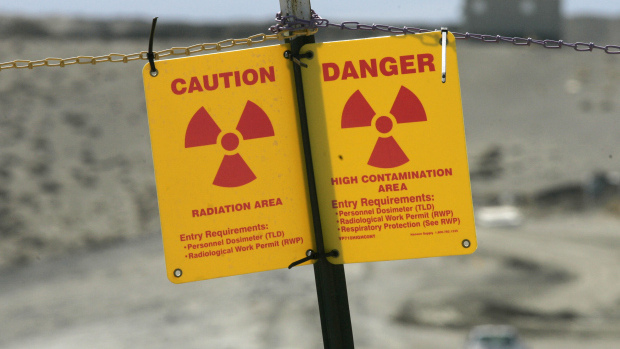 Liberal activists are once again contradicting themselves on environmental policy but for once, it has nothing to do with climate change.

Instead it involves the cleanup of a Superfund site known as the West Lake Landfill. An old quarry outside of St. Louis that for several decades acted as a landfill, it was contaminated with radioactive material in the 1970s when a contractor illegally dumped left over Manhattan project waste. Subsequently named a Superfund site in 1990, federal bureaucrats have been struggling ever since to come up with a plan to clean it up.

The initial EPA plan approved in 2008 was to cap the waste in place. This has been met with resistance by a coalition of environmental activists led by Just Moms STL (which has close ties to the Teamsters) and the Earth Defense Coalition (a group of professional eco-protestors). Instead they have been pushing for a full excavation of the site despite the fact that the radiological material is buried deep underground, poses no current risks to the community, and would not in the future were the cap put into place.

Earlier this year then-EPA chief Scott Pruitt caved to pressure and reversed course, announcing an “Excavation Plus” remedy for the site. This proposal would remove almost 70 percent of the radioactive material from the landfill and dispose of it elsewhere, leaving the surrounding neighborhoods and communities through which the waste would be transported at greater risk of exposure.

At issue is the increased risk that comes from excavating and transporting this radioactive material. Documents from the EPA show that the cancer risk in the surrounding community will be almost five-times greater as opposed to just capping the site. Full excavation would also increase the likelihood of a transportation accident 54 fold, an unnecessary risk since the site can be adequately remediated in place.

Given the sheer volume of fill that will be removed (274,000 bank cubic yards (bcy) including 83,900 bcy of radiological material) cargo trucking and freight rail would have to be a part of the haulage mix. But while many Americans have interacted with our domestic trucking industry in some way, they know much less about our country’s vast network of freight rail lines, which moved almost 9 percent of total freight tonnage in this country in 2015, and its record of transporting hazardous materials.

Since 1997 the occurrence and frequency of train accidents has been increasing. Statistics from the National Transportation Safety Bureau have found that a train collides with another object or is derailed about every 90 minutes and almost every two weeks one of those derailments involves a train carrying hazardous materials.

Terrorist threats to trains are also on the rise. Last summer both the Islamic State of Iraq and Syria (ISIS) and al Qaeda in the Arab Peninsula (AQAP) issued messages encouraging their followers around the world to derail trains. AQAP actually went as far as providing detailed instructions for a derailment device in their online magazine. A new study from the Mineta Transportation Institute outlines the frightening level of success with which these attacks can be carried out. From 1970 to the end of 2017 the group found that 42 percent of all attempted train derailments were successful.

Meanwhile, a recent “60 Minutes” story highlighted an al-Qaeda plot to derail a train that dates back to 2012 and an American sleeper left at large when the cell was wrapped up. Pending legislation in states like New Jersey would make the job of these would be attackers even easier. S1883 would require freight rail operators to post online routes, volumes of what they carry, and an analysis of what would happen if their contents were spilled, all in the name of transparency and preparedness. As one official with Norfolk Southern put it, “There provisions are nothing short of a gift to ISIS…this bill takes all the hard work out of being a terrorist and it flies in the face of our national efforts to protect…our hazardous materials from attack and sabotage.”

In light of this information, why would anyone, much less environmental activists back a plan that puts the environment at greater risk, especially given their past opposition to transporting radioactive material via rail? Politics and money have a lot to do with it. The capping project would be completed by non-union labor with private funds while the proposed “excavation plus” plan would be completed by union labor paid by federal funds. It is nothing more than another play to grow the size of government and fatten the coffers of big labor with your hard-earned tax dollars.

The EPA is expected to release a final decision on the cleanup later this month and reports indicate that Acting Administrator Andrew Wheeler is reviewing the “Excavation Plus” plan. Radioactive material will always need to be transported via truck and rail, given power generation and medical uses, but there is no need to take unnecessary risks and transport this large amount of radioactive material from the West Lake landfill when it could be adequately remediated in place. Wheeler would be wise to change course and give the cap a close second look.

Travis Korson is a veteran of politics with years of experience in campaigns, communications, and public policy. He previously served in the Bush White House and has also spent time at various conservative organizations and government institutions including Frontiers of Freedom,  the Heritage Foundation, Americans for Prosperity, and the Faith and Freedom Coalition. He is a graduate of the George Washington University where he studied International Affairs with a focus on International Economics.