Under Trump, we’re starting to see the jihadist terror for what it really is. 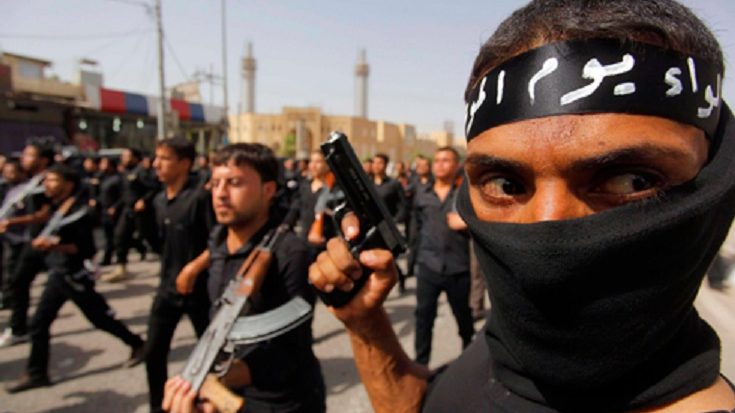 The false analogy fallacy occurs when superficial similarities between events being compared are outnumbered by fundamental differences. This cognitive bad habit has always existed, but has become more prevalent since Vietnam and the increasing politicization of mass news on network and cable television, social media, and especially the internet. The specious analogy between a recent, short-lived attack on our embassy in Baghdad, and the 2012 Benghazi fiasco during Obama’s watch, is a recent example.

Useful analogies are predicated on the permanence of a flawed human nature driven by greed, power, or irrational hatreds. One of the greatest historians ever, Thucydides, explicitly said he wrote his history of the Peloponnesian War in order to provide “an exact knowledge of the past as an aid to the understanding of the future, which in the course of human things must resemble if it does not reflect it.” That’s why he called his history a “possession for all time.” Similarly the Roman historian Livy, writing at the end of nearly a century of savage civil wars, intended to show “what to imitate,” and to “mark for avoidance what is shameful in the conception and shameful in the result.” Without those aims, history is just antiquarianism or another form of high-brow entertainment.

And politics, which thrives on false analogies. The war in Vietnam left us two malign cultural consequences. The first was the antiwar Democrats and their media subsidiary transformed a military victory into a defeat. This created the Left’s paradigm for every U.S intervention abroad as prima facie a neocolonialist, unjust, racist war against national self-determination in order to profit arms manufacturers, the “merchants of death,” and other capitalist “malefactors of great wealth.” Following this ideological deformation came the “another Vietnam” false analogy, and the “Vietnam syndrome”: fear of casualties, self-doubt about our goodness, and angst over “quagmires” and “escalation.”

Leftist Democrats, opportunistic presidential candidates, and the usual media suspects all exploited the Vietnam false analogy to demonize the post-9/11 wars in Afghanistan and Iraq. A few weeks into the former conflict, New York Times columnist R.W. Apple asked, “Could Afghanistan become another Viet-Nam?” and used the loaded word “quagmire.” The concern over Saddam Hussein’s WMD programs, just one of the many predicates for the Senate’s authorization for the war, was called a lie––“Bush lied, millions died,” the protestors chanted. This claim echoed the alleged false predicates for the 1964  Gulf of Tonkin Congressional joint resolution concerning two attacks on U.S. naval vessels by the North Vietnamese. This resolution authorized the president to use “armed force” in the region, and became the imprimatur for subsequent “escalation.”

So too the Patriot Act, which removed the “wall of separation” between domestic and foreign intelligence. That “wall” prevented the FBI from examining the computer of another jihadi training to fly a jet a month before 9/11. Yet despite the dangers of the “wall” made obvious after 9/11, leftist critics like ACLU accused the act of  “Put[ting] the [CIA] in the business of spying on Americans,” evoking the Vietnam-era bogey of the CIA trying to subvert the antiwar movement, among other violations. Indeed, the 1975 Church Committee investigation of domestic spying during the Vietnam era led in 1978 to the creation of FISA courts––which we now know have been corrupted into tools for spying on Americans by the FBI and other security agencies.

Likewise the humiliation and “torture” of prisoners in Iraq’s Abu Ghraib prison in 2002, which included legal enhanced interrogation techniques like loud noise, sleep deprivation, and extreme heat and cold, were transformed into the equivalent of the My Lai massacre in 1968, when between 347 and 504 unarmed civilians were massacred by U.S. troops, an analogy we saw in the Los Angeles Times headline in 2002 that read, “Military Must Squarely Face ‘New My Lai.’” In fact, what happened at Abu Ghraib was light-years from what went on there under Hussein, such as taking a power drill to people’s skulls, let alone a mass slaughter like My Lai.

Then there was the Democrat opposition to the 2007 “surge” strategy for gaining control over sectarian and insurgent violence in Iraq. Senator Barack Obama called the surge a “reckless escalation,” implying a parallel to Vietnam, and introduced legislation calling for the complete withdrawal of all troops by March 2008––an aim he later achieved as president in 2011, creating the vacuum filled by ISIS and Iran, which has turned Iraq into its satrapy and led to the disorder Trump has to deal with.

Why do such false analogies with Vietnam persist? Because they serve the ideological delusions and propaganda of the left. The common interpretation of Vietnam as a “bad war” motivated by racism and power-hunger has been repeated over and over by historians, the media, and popular culture. Reporters at the time, most of whom sat in Saigon and reported hearsay, were lavished with prizes and book contracts, movies like agitprop master Oliver Stone’s Platoon and Francis Ford Coppola’s Apocalypse Now were celebrated, and textbooks from grammar school to university continue to recycle this skewed history. That culture-wide cachet makes Vietnam the go-to analogy for a Left that wants to demonize America and weaken its resolve.

So it’s no surprise that some on the Left would try to turn one of Obama’s and Hillary’s worst foreign policy failures and examples of covering up the truth with lies, into a weapon against Trump, as MSNBC’s Joy Reid and a left-wing veterans group did. But the analogy is so egregiously false that Democrats recognize the obvious difference and have avoided coming anywhere near it. The most important difference is the fact that no Americans died on Trump’s watch, unlike the four Americans who withstood 13 hours of attacks waiting for help that never came. In contrast to Obama doing nothing, Trump immediately sent reinforcements to bolster the scaled-back diplomatic corps, and made it clear that any further violence will be met with immediate retaliation.

Nor was the threat empty. After receiving actionable intelligence of an imminent attack on American personnel in Iraq last week, Trump ordered the killing of Qassim Soleimani, the chief of the Iranian Republican Guard’s Quds force, who had directed for decades Iran’s terrorist attacks abroad. Soleimani had gallons of American blood on his hands, being responsible for 17% of U.S. dead in Iraq from the shaped charges and more deadly mortars he provided the jihadists attacking our forces. Soleimani was the same designated terrorist Obama would not sanction killing, even though he was for two decades the most deadly and skilled enemy of our country. And to further signal his resolve, after Soleimani’s demise the president ordered a strike on the convoy of another Iranian proxy, the Imam Ali Battalion, killing its chief Shebl al-Zaidi, a particularly vicious jihadist.

Another contrast between the response to the Benghazi and Baghdad attacks is the shamelessly politicized and dishonest attempts on the part of Obama officials to spin the organized attack in Benghazi as a spontaneous reaction to an obscure anti-Muslim internet video. The purpose was  to protect Obama’s duplicitous campaign narrative that the terrorists had been neutralized. But most despicable was Hillary Clinton’s lying to the faces of the grieving parents of the four dead heroes as they stood near their sons’ coffins. Trump, however, has nothing to hide or spin because he did what a commander-in-chief should do––defend our military and diplomatic personnel, and retaliate for their deaths.

Rather than the “strategic patience,” “leading from behind,” and reticence to punish aggression that were obvious in the Benghazi debacle, Trump has authorized an aggressive offensive against the Iranian thugs and proxies now dominating the Iraqi government and endangering American lives.

Finally, a consequence of the failure to prevent and retaliate for the Benghazi attack was the energizing of jihadist outfits by a victory over the hated infidel, just as the Iranian assault on our embassy in 1979 did. Such victories and killing of Americans–– like the Beirut bombing of our military barracks in 1983, the retreat from Mogadishu in1993, the murder of American military personnel in Riyadh in 1995 and Dharan in 1996, the east African embassy bombings in 1998, and the attack on the Navy destroyer Cole in 2000––all have provided morale and prestige to the jihadists and strengthened their resolve.

Such a boon will not follow the recent failed attack on our embassy in Iraq. In fact, after just a few days of protests the militiamen and their supporters, whom the New York Timeseuphemized as “mourners,” had called the whole thing off and gone away, leaving a few militiamen to lob some fireworks and Molotov cocktails that damaged a parked car. A few rockets were also fired, to no effect, in the vicinity of the Green Zone. Perhaps their appetite for a more aggressive assault on Americans was dulled by the 100 Marines and the Apache helicopters Trump sent sent to protect the embassy. And rather than retreat or pull back from Iraq, Trump has ordered even more troops and weapons to Baghdad and the region. This build-up will enhance our ability to handle any attempts to get revenge for Soleimani’s death.

As Trump said, his handling of the Baghdad embassy attack is the “Anti-Benghazi,” which enhanced American prestige, whereas the Obama-Hillary response to the attack in Benghazi diminished it. But the Benghazi analogy will quickly fade away. Not even Democrats are stupid enough to try and weaponize a foreign policy failure like Obama and Clinton’s in Benghazi, and remind people of their two biggest political stars’ worst moments.

But don’t think that the Democrats’ shying away from the Benghazi analogy means that they’re starting to accept reality and think coherently. Their loathing for America is too deeply engrained in their worldview. This is obvious in their eagerness to blame the embassy attack on Trump’s earlier bombing of an Iranian proxy-militia’s military base and other sites, killing 25 jihadists, and their second-guessing of the killing of Soleimani: Bernie Sanders and Nancy Pelosi both used the Vietnam-era cliché “dangerous escalation.” Making the U.S. the global evil genius responsible for all the world’s ills is an old tactic for the Left, one so banal that it’s spawned a cynical truism useful to America’s allies and enemies alike: “When all else fails, blame the Americans.”

The longevity of the “blame America first” trope is explained not just by the Left’s inveterate hatred of the U.S., but by the progressives’ voodoo psychology that turns ruthless, illiberal global despots and murderous gangs into children so traumatized by Uncle Sam’s abuse that they blindly lash out in violent reaction to our alleged oppression. So Leftists and even some Republicans blame jihadist terror on Israel, colonialism, the absence of political freedom, our support for corrupt autocrats, jobless economies, the lack of accessibility to women, and “disrespect” to Islam and Mohammed––anything and everything except the Koran, hadith, sira, and 14 centuries of Islamic doctrine and practice that have consistently commanded the faithful to “fight all men until they say there is no god but Allah,” as Mohammed said. And isn’t it ironic that those who demonize the West as a racist oppressor, and who trumpet their groveling respect for, and tolerance of dark-skinned “others,” in fact patronize them and diminish their humanity by stripping them of their agency, their power to act on their own ideals, beliefs, interests, and goods?

That two-bit psychology is the mother of all false analogies and the fake news they spawn. And the most dangerous. For as Sun Tzu said, “If you know neither the enemy nor yourself, you will succumb in every battle.” Maybe under Trump’s leadership we’re starting to see the jihadist terror for what it is––traditional Islam, rather than a figment of our own therapeutic obsessions and self-loathing political ideologies