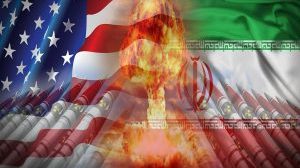 American involvement in the Middle East formally began in 1928 with the Red Line Agreement, essentially splitting access to the oil properties of the northern Middle East (principally Iraq) between France, the United Kingdom and the United States. In 1933, the USA entered into an agreement with Saudi Arabia to form ARAMCO, a joint venture to exploit that country’s newly discovered oil fields. America’s relationship with Iran was solidified by the CIA-aided 1953 coup d’état which established the Shah of Iran as the country’s ruler. The Shah was overthrown by the current leadership of Iran in 1978, leading to the sacking of the American embassy and holding of American diplomats hostage until 1980.  This was the first overtly anti-American incident in what became a long series of assaults against American interests in the Middle East, culminating in the 2001 attacks.

The 21st century wars between the Americans and Islamic terrorists which followed 2001 are familiar to most Americans.

The major stake that all Western countries have had in the Middle East for the past century has been the need for oil which has powered the economic and technological advances that became the foundation of Western civilization. Control of that resource has been a critical, life-or-death priority for these countries.

That control has been very expensive in the 21st century. Total casualties through 2018 including civilians are estimated at 500,000. US casualties alone were 7820 (including contractors and civilians) (Source: Watson Institute for International and Public Affairs, Brown University, November 2018). The financial costs of these wars are estimated at $6.4 trillion – nearly 1/4 of our national debt (Krumholtz, ibid.).

This equation has undergone a radical change in the past five years with the result that the USA is now energy independent The USA has become in fact the largest energy exporting nation in the world, thanks to technological developments in the energy industry, especially rediscovery and refinement of fracking. The USA no longer needs Middle Eastern oil. The motivation which has fueled our involvement in Middle Eastern affairs since 1928 has evaporated!

Our remaining interests seem to be 1) safeguarding the security of Israel — a moral rather than a strategic obligation, and 2) the denuclearization of a very recalcitrant Iran. We have NO remaining strategic interest in Iraq. That being the case, when last week’s vote by the Iraqi parliament to prohibit the presence of foreign soldiers in their country was concluded, our answer should be “GOODBYE IRAQ!” This is a gold-plated opportunity for us to pack our soldiers and our ordinance and leave this god-forsaken country to its own devices.

Why on earth should we abandon the country where we have invested so much blood and treasure to free them from the tyranny of Saddam Hussein? In order to understand the actual peril of our continued involvement in the Middle East, it is necessary to recall that the underlying reality of the region is the war between the two dominant sects of Islam: the Sunnis and the Shia. This war had been going on for 1400 years. The course of events which has driven US policy over time has put America on the side of the Sunnis, largely because we were expelled from Iran, the leading Shia nation, and accepted by the leading Sunni country, Saudi Arabia.

We have supported the Sunnis even to the extent of recently organizing a formal alliance between the several Sunni nations and equipping and fighting their wars, especially in Iraq, Syria, and earlier in Lebanon. Since Iraq is predominantly Shia (60-70%), they will never be happy with our Sunni allies. They want us to leave. If we don’t want to get drawn into their thousand-year war with the Sunnis, we should get out while we can.

As Krumholz reminds us, Iran is bordered in the north by Afghanistan and the south by Iraq, both occupied by Americans. They are surrounded, and they will not give up as long as that situation exists. It is definitely not in our national interest to find ourselves leading the Sunnis in their ongoing war with the Shia.

What about our leverage to denuclearize crazy Iran? Today’s weaponry allows long-range warfare, as our recent sorties against Syrian and Iraqi targets has demonstrated. As long as we retain that capability, whether by land bases or sea, we have the needed leverage to protect our interests. Our withdrawal of ground troops will have to be gradual in any case, and our negotiations can be paced accordingly.

Some critics might worry that this withdrawal at this time would be interpreted by Iran and the world as the triumph of Iran in the current contest of wills. The simple explanation would be that America has always proclaimed and actually sought peace, not conquest, of iran and Iraq as well. This gesture is a concrete proof of our intentions, We will maintain our long range strike capacity and our economic sanctions as long as Iran poses a nuclear threat and we will follow up on the President’s call on NATO to take a more active part in this policy, but our motivations are truly peace and prosperity for all nations.

So, what about Israel? This is a somewhat different challenge. For the most part, our Mediterranean fleet can (and has) provided much of the needed cover. For out-of-range options, coordination with the Israelis themselves should provide the answers.

The bottom line is that America’s most basic responsibility is the strategic deployment of our forces in areas of national interest only. The lives and futures of these troops are not to be squandered recklessly on misbegotten missionary adventures of nation-building to “spread democracy’” especially to countries whose entire history and culture demonstrates their lack of receptivity to our doctrine, emancipating as it has been for us.