Federal Taxes Receipts At an All Time High 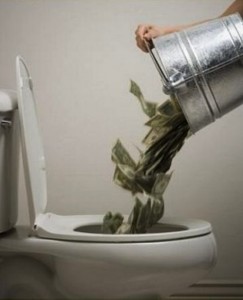 The federal government raked in a record of approximately $2,883,250,000,000 in tax revenues through the first eleven months of fiscal 2015 (Oct. 1, 2014 through the end of August), according to the Monthly Treasury Statement released Friday.

That equaled approximately $19,346 for every person in the country who had either a full-time or part-time job in August.

According to the Bureau of Labor Statistics, total seasonally adjusted employment in the United States in August (including both full and part-time workers) was 149,036,000. That means that the federal tax haul so far this fiscal year has equaled $19,345.99 for every person in the United States with a job.

In 2012, President Barack Obama struck a deal with Republicans in Congress to enact legislation that increased taxes. That included increasing the top income tax rate from 35 percent to 39.6 percent, increasing the top tax rate on dividends and capital gains from 15 percent to 20 percent, and phasing out personal exemptions and deductions starting at an annual income level of $250,000.

An additional 3.8 percent tax on dividends, interest, capital gains and royalties–that was embedded in the Obamacare law–also took effect in 2013.