Flee, Save and Hide: “Phil Michelson was pilloried by the national media for daring to say it’s time to check out of California.” 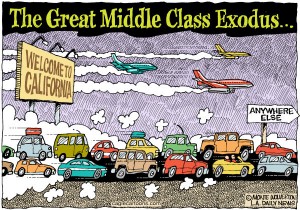 There is a serious scramble in this country to keep hard-earned money. Sure, the media points out the nation reelected President Obama and his agenda of high taxes and slow growth, but the majority of earners are voting in a different manner. They are seeking new places to live and putting money into the bank or under the mattress. Ironically, more and more are coming to the stock market knowing gains will be hijacked, but the net might still be better than low interest rates coupled with a dilapidated currency.

Last week Phil Michelson was pilloried by the national media for daring to say it’s time to check out of California after Proposition 30 passed, which created four new high income tax brackets, with $1.0 million earners paying an extra 3% plus another 1% for mental health spending.

In addition, there was an increase in sales tax to 7.5% from 7.25%. So Phil, who pays 43% to Uncle Sam, will have another 13.3% of his income snatched, and he had the nerve to complain, suggesting it might be time to break out the driver, pack the bags, and get the hell out of town & state.

It’s unfortunate he had to take the heat, which didn’t get better even when Tiger told the press that’s why he left, and that was before the latest tax increase. Keep in mind that even now people earning more than $48,000 have a whopping 9.3% tax hit. If Phil leaves, it could take him a long time to actually get out of the state because it’s been a crowded line.

California’s population grows each year, but it’s very deceptive. There has been massive migration of the state’s mostly educated and motivated people to other states.

California isn’t the only state that has seen a massive move of able-bodied adults seeking to not only earn money, but to actually keep it. It’s resulted in massive income expansion in states like Florida, Texas, North Carolina, Nevada, and South Carolina. In the meantime, New York, New Jersey, and Illinois might have to consider border fences to keep the folks inside.

More recently, Maryland has seen a massive exodus after the governor there raised taxes and fees 24 times in a three year period. Presto… 31,000 folks, their skills, and income- gone! This isn’t new, although when these proposals and decisions are made, the masses are always told not to worry. The magic elixir of higher taxes actually makes things, worse whether on a national or local level and no matter the country.

For those that can’t move, it seems like they’re just going to hunker down and squirrel their money away. Take yesterday’s news on income and spending. The 2.6% monthly increase in income was the biggest jump since May 2009 as an extra $26.0 billion in special dividends and $15.0 billion in early bonuses coupled with the Hurricane sandy slowdown in November, made a lot of pockets swollen. Americans flush with cash should have resulted in a great month for retail.

That’s not what happened, as retail sales continued to decrease throughout the month and consumption only edged up 0.2%. Moreover, savings surged to 6.5%, almost double the September reading. America used to be a sea of faith washed in optimism and opportunity. Now we grapple with confused alarms and flight.

Earners are fleeing the assault on their wallets. Phil is ready to bolt as well. He will not be the first or the last.