Four Years of Projected Weakness: Death and Attacks on US Embassies 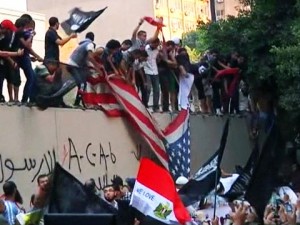 “We condemn the continuing efforts by misguided individuals to hurt the religious feelings of Muslims.” – Obama Administration

“I strongly condemn the outrageous attack on our diplomatic facility in Benghazi (Libya).” – Obama Statement  (No mention was made of the act of war when the Muslim Brotherhood attacked the U.S. Embassy in Cairo, Egypt.)

On the 11th Anniversary of the September 11th attacks, the American Embassy in Egypt and the American Consulate in Libya were attacked in what had to be coordinated and planned efforts.

“U.S. Ambassador to Libya John Christopher Stevens and three other American diplomats were killed Tuesday in an assault on the American consulate in the eastern city of Benghazi, the White House said Wednesday….

“The violence in Benghazi followed protests in neighboring Egypt, where a group of protesters scaled the wall of the U.S. Embassy in Cairo on Tuesday evening and entered its outer grounds, pulled down an American flag, then tried to burn it outside the embassy walls, according to witnesses. On Wednesday morning, a sit-in of several dozen protesters continued outside the Cairo embassy….

“The attacks — apparently prompted by outrage over an amateur, anti-Muslim film made in the United States — are likely to prompt a deep rethinking of U.S. policy toward both Libya and Egypt, where the United States supported Arab Spring revolutions and has been instrumental in providing financial and diplomatic support for their newly-democratic governments. Local security officials in both countries appeared slow to provide protection for the American diplomatic installations, and have issued no firm statements explaining the violence or expressing strong concern.

“Local media estimated that about 2,000 people participated in the protest, though in video footage of the incident only about a dozen appeared to have scaled the embassy wall. The protesters on the wall replaced the U.S. flag with a black flag with an inscription that read, “There is no god but God and Muhammad is his prophet.”

“Earlier Tuesday, the U.S. Embassy in Egypt had condemned insults to religion, saying in a statement that “we firmly reject the actions by those who abuse the universal right of free speech to hurt the religious beliefs of others.”

“A spokesman for the Muslim Brotherhood, of which Morsi is a member, said that the United States should do a better job of protecting Islam.”

Four years of Barack Obama’s failed foreign policy has led to this result — former allies attack our embassies and kill our ambassadors and the Obama Administration apologizes for the film that is blamed for starting the violence and issues a press release stating that it “condemns” the violence. Weakness invites attacks.

The governments of Egypt and Libya showed their true colors yesterday. They did nothing to protect our embassies and their response along with Obama’s response was entirely unacceptable. When you spend four years projecting weakness as Obama has done, this is the sad result. Peace does not come through weakness. It is achieved and maintained by demonstrating consistent and unwavering strength.